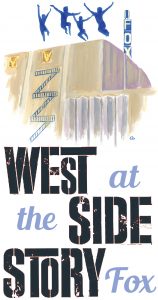 While Spokane Civic Theatre creative consultant Jake Schaefer was researching “West Side Story” recently, he stumbled upon something that made him laugh. An article announcing composer Leonard Bernstein’s then-upcoming production was headlined “Leonard Bernstein announces title of new play. It’s called ‘West Side Story.’ ” “It’s called ‘West Side Story.’ ” Period. No fanfare, nothing to indicate the global phenomenon the musical would eventually become. “No one had any idea,” Schaefer said. “At that time, there were no four-letter cuss words in musicals. There was more dancing in the original production of ‘West Side Story’ than in any musical before. It was trendsetting.”

“West Side Story,” inspired by William Shakespeare’s “Romeo and Juliet,” explores the rivalry between the Jets, a white gang, and the Sharks, a Puerto Rican gang, in mid-1950s New York City. The forbidden love between Tony, a former member of the Jets and best friend of gang leader Riff, and Maria, the sister of Bernardo, leader of the Sharks, is at the heart of the story.

The musical opened on Broadway in 1957, with music by Bernstein, lyrics by Stephen Sondheim, a book by Arthur Laurents and choreography by Jerome Robbins. The next year, the musical was nominated for six Tony Awards, including best musical. It won two, for best choreographer and best scenic design. In 1961, “West Side Story” was adapted into a film starring Natalie Wood as Maria, Richard Beymer as Tony, Russ Tamblyn as Riff and Rita Moreno as Anita. The wildly successful film was nominated for 11 Academy Awards, of which it won 10, including best picture, best director, and best supporting actor and actress. Since closing on Broadway, “West Side Story” has had two Broadway revivals, in 1980 and 2009, and countless national and international tours and performances.

In the fall of 2017, Spokane Civic Theatre opened its 71st season with a production of “West Side Story.” Following the show’s successful run (it was popular enough to warrant two extra shows), Civic and the Spokane Symphony have collaborated on a new production of “West Side Story” to be performed Saturday and Sunday at the Martin Woldson Theater at the Fox. Schaefer is directing the production, and Henry McNulty is music directing the piece at Civic while the symphony’s resident conductor Morihiko Nakahara will lead the orchestra.

As part of the new production, Civic and the symphony are bringing in four actors with Broadway and national performing experience to take on the lead roles. Matthew Hydzik, who portrayed Tony in the 2009 Broadway revival of “West Side Story,” will reprise his role, as will Cody Green, who played Riff in the Broadway revival. Eden Espinosa, whose Broadway credits include “Wicked,” “Brooklyn” and “Rent,” will play Anita, and Julliard graduate Mikaela Bennett, who was a featured soloist in “Bernstein on Broadway” at the Kennedy Center, will star as Maria.

“Anytime two companies get together to produce one product, you have to look at it from the outside,” Schaefer said. “Civic’s production, fall of 2017, has a period at the end of it because it was a very good show and it was very successful. This is a new production, and it’s coming from two perspectives, both the symphony’s and satisfying their patron base and from ours. How do we offer a resurgence of what we already offered?” About 20 members of the Civic production will appear in the new production, including Maddie Burgess and Preston Loomer, who starred as Maria and Riff, respectively. They will both join the ensemble in the new production. “Not because the ensemble that we had wasn’t sufficient but because when you increase the number of players in the orchestra, you, by way of osmosis, have to increase the number of singers so everything is heard,” Schaefer said. The ensemble rehearsed for about three weeks on their own and will spend two days rehearsing with the visiting performers.

Nakahara conducted the symphony and Civic’s collaboration of “Les Misérables” in 2014. Though he’s loved the “West Side Story” soundtrack for years and has worked with selections from the musical, songs like “Cool” and “Somewhere,” before, he’s never conducted the piece in full. Because 2018 is the 100th anniversary of Bernstein’s birth, Nakahara said he’s conducted a lot of the composer’s music in the past few months. He’s found a few common threads in Bernstein’s work, whether it be a musical score, a film soundtrack or a symphony.

For one, most every piece features a rhythmic, groovy type of writing. But there’s also a deep sense of lyricism. “Something like ‘One Hand, One Heart’ or ‘Somewhere,’ for instance, very much has this sense of yearning and longing that he depicts in his music,” Nakahara said. “The sense of wit, sense of humor as well as this sometimes all out, groovy, virtuosic things like you find in ‘Cool’ or ‘Mambo,’ for instance … You can find that same kind of musical spirit, that musical language.” Nakahara enjoys the added element of being onstage with the performers. “For something like this, especially since we’re not in the pit, that just means we have to be more in tune to each other, more attuned to what’s happening and more attuned to the singing, dancing and movements that’s happening and adapt and adjust on the spot,” he said. “That’s part of what makes this fun.” The musical’s darker themes were not often seen onstage when “West Side Story” premiered on Broadway, but, as Nakahara sees it, it’s those darker themes that make “West Side Story” feel contemporary more than 60 years after its Broadway debut.

As he becomes more familiar with Bernstein’s work, Nakahara gets the sense that the composer’s goal was to help solve the problems he addressed in his work. “To focus on Bernstein’s music and his life also and his career was really all about bringing people together,” he said. “He really had this sense of longing to create this utopia in which everybody from all walks of life and all backgrounds would harmoniously love one another and co-exist.” The opportunity to present a piece as culturally significant as “West Side Story” is not lost on Nakahara or Schaefer, and they’re both excited at what a collaboration and production like this could mean for the Spokane arts community.

“ ‘West Side Story’ is arguably one of the greatest classical musicals that America has as an export, and at the same time, one of most unique properties we’ve ever had and… could not be more culturally relevant,” Schaefer said. “To offer that in Spokane and include both our talent pool, orchestra and ensemble, and guest artists in that incredibly historic building, it’s once in a lifetime. It’s got all the goods to be very, very significant.”