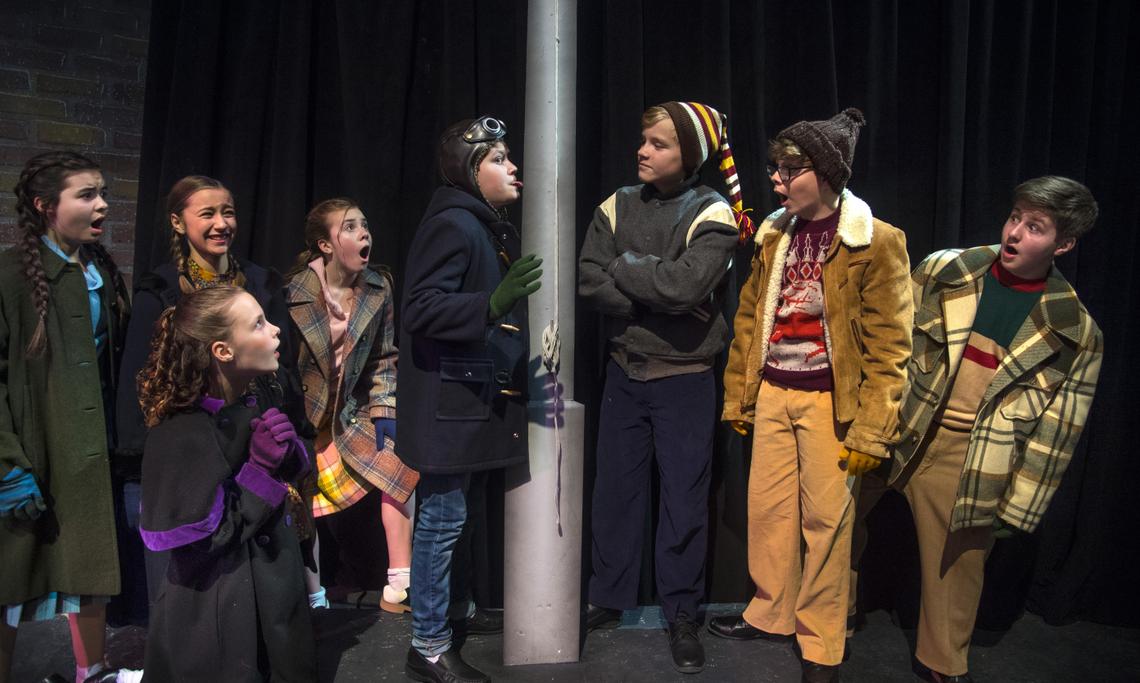 W.C. Fields once said “Never work with children or animals.” Luckily for Spokane theater fans, Kathie Doyle-Lipe, director of Spokane Civic Theatre’s “A Christmas Story: The Musical,” didn’t listen, using both child and canine performers to bring a beloved holiday classic to life. The Civic production is based on the 1983 movie of the same name, itself inspired by semi-autobiographical stories from writer Jean Sheperd’s “In God We Trust: All Others Pay Cash.”

The story centers around a young boy named Ralphie Parker (Kevon Burget), who wants nothing more than a Red Ryder Carbine Action 200-shot Range Model air rifle for Christmas. In the meantime, Ralphie and his buddies Flick and Schwartz (fun performances by Matthew Brauhn and Zachary Abshire) must contend with neighborhood bullies Scut Farkus and Grover Dill (Clayton Sanchez and Cole Henry, who play nasty well), while Ralphie’s father, called the Old Man (Mark Pleasant) tries in vain to fix a malfunctioning furnace and argues with his wife, known only as Mother (Tami Knoell) over the Old Man’s “major award.”

Burget is fantastic as Ralphie, taking on the iconic role with ease. Though still young, Burget’s voice is strong, especially during his first number, “It All Comes Down to Christmas,” and “Ralphie to the Rescue!,” my favorite part of the show. It’s especially fun to watch Burget interact with Tom Armitage, who plays Sheperd as an onstage narrator. Armitage brings both a warmth and sense of humor to the role, fondly recalling childhood memories while also reliving each moment, both happy and cringeworthy, as Ralphie experiences it.

Knoell, a talented singer, is great as Mother, nurturing her family as best she can (“Just Like That”) while also lamenting the amount of work she has to do to keep things running smoothly (“What a Mother Does”).

For his part, Pleasant is hilarious as the Old Man, becoming borderline obsessed with fixing the furnace, escaping his neighbor’s dogs (played by Bailey and Moose Alberts, who are naturals onstage and handled by Amelia and Jeremy Alberts), and completing crossword puzzles for a chance to win a variety of prizes. He particularly shines during “The Genius on Cleveland Street” and “A Major Award.” Look out for a leg lamp kick line during the latter.