Countdown to White Christmas at Spokane Civic Theatre. Beginning Friday, November 16, the Civic  stage will twinkle with tinsel and lights and snow and all things Christmas as we open White Christmas directed by Yvonne AK Johnson. This show only runs through December 21, and tickets are only $33 for adults, $31 for seniors and military and $26 for students. 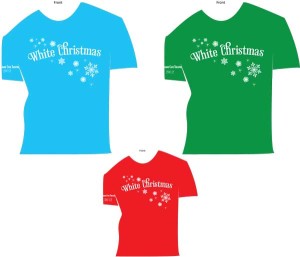 Yvonne AK Johnson:  This is Bing Crosby’s hometown! Plus, Who doesn’t watch White Christmas on television every year?

Why is White Christmas big to the holidays?

Yvonne AK Johnson: It’s a part of holiday tradition for most families.

How is the musical different than the movie?

Yvonne AK Johnson: As much as the musical script takes us to various locations from The Western Front in 1944 to the The Ed Sullivan show, New York night clubs, an Inn in Vermont and a train in 1954 you still will need to use your imagination! Hollywood is able to film on location and will take months or even years to do so. We create all of this theatre magic in two hours on one stage.

Do you think people should see the movie and the musical (as in watch the movie before or after?)?

Yvonne AK Johnson: The script is different than the movie. I think audiences will enjoy both and will have fun comparing the differences.

Does the movie inspire you in your directing?

Yvonne AK Johnson: To a degree but we need to stay true to the script and embrace its differences.

What can the audience expect? What will wow us?

Yvonne AK Johnson: Kathie Doyle-Lipe and Ashley Cooper have done a beautiful job on the various dance forms represented in the choreography. We’re also using all of the drops that set designer Peter Hardie created two years ago. The finale drop is so beautiful that it looks like a Thomas Kincaid painting. The set design works very well with our space and every fly line is in full use and then some! This cast is extremely lovable and dynamic. Their performances are heartwarming beyond words. Have I mentioned the costumes …Jan, Jen and Dee have knocked it out of the park yet again!

To find out more about Spokane Civic Theatre, check out Civic News, stay up to date with cast and crew on our Facebook Page and keep an eye on Pinterest for some pinnable images of all things theatre! Upcoming productions for the Season to Inspire include White Christmas, Escanaba in Love, Next to Normal, On Golden Pond, Treasure Island, Grease and more.