What's another word for Pirate's Treasure?

Who’s got the Pirate’s Treasure

Looks like it’s time for a Treasure Hunt, Treasure Island style. So, get your swashbuckling pirate gear together and meet some of the cast and crew of Spokane Civic Theatre’s Treasure Island Saturday March 30th as you use your treasure map to try and locate the Pirate’s Booty. That’s another word for Pirate’s Treasure, in case you were unaware.

With your treasure map of 10 Downtown Spokane businesses in hand, visit said business and get a stamp on your treasure map. Once you have been good and stamped. take the map to Green Salon & Day Spa at W 227 Riverside Ave. Spokane, Washington. You shall then be entered into a drawing to win the pirate’s treasure.  Added bonus: special treasure hunters deal. Check out the pirate’s list of the businesses, prizes, and specials.

What You Need To Know To Be A Pirate

Prizes: Over $500 in prizes, including a walk-on role for Treasure Island at the Spokane Civic Theatre on closing night, 4 tickets to opening night, and tons of gift cards to local businesses.

What to do: Visit the 10 downtown businesses on the treasure map and get a stamp at each stop. Once you’ve completed the hunt, drop your map off at Green Salon & Day Spa for your chance to win the Pirate’s treasure.

Bonus: Each business on the stop has a special that day for people on the treasure hunt. From 20% off, to swag, to free dessert with lunch – you’ll make out with pirate loot. 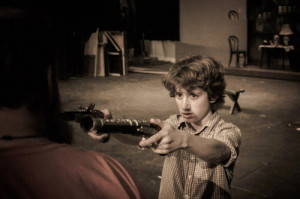 Treasure Island opens April 5 and runs through the 21st.

Call the Spokane Civic Theatre box office at 509.325.2507 for tickets or purchase online.