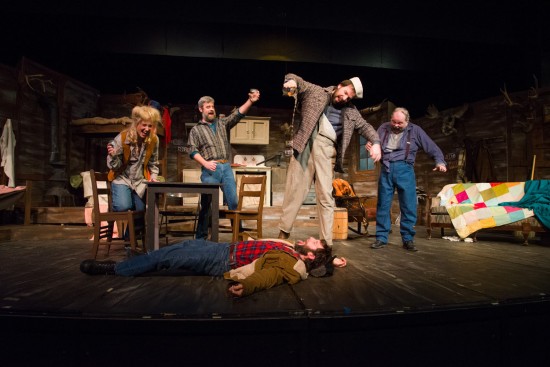 The camp is a safe haven for the Soady men, the central characters in Jeff Daniels’ “Escanaba in Love,” now playing at Spokane Civic Theatre. It’s a place to shoot deer, swig on homemade maple alcohol, pass gas and reminisce about the good ol’ days. The presence of any women, with their delicate sensibilities and inability to participate in anything outdoorsy, would only spoil the idealism.

But 18-year-old Albert Soady Jr. (Jon Hudson) breaks that cardinal rule the minute he rolls into the deer camp one winter night. He has two surprises for his father Albert Sr. (Dave Rideout), his grandfather Alphonse (Ron Ford) and family friend Salty Jim (Chris Taylor): Not only is he shipping off to basic training in the morning, but just hours earlier he tied the knot with a girl he’d just met.

The girl in question is named Big Betty Ballou (Lindsay Teter), and Albert “won” her courtship in a kissing contest at a nearby watering hole earlier in the evening. Betty is as loud and unrefined as the men – she boasts about catching trout with her bare hands and promises to drink all of the men under the table, a claim that the cocksure Soadys consider almost blasphemous (that is, until she proves it).

And yet, despite Betty’s rough-and-tumble demeanor, the men refuse to recognize her as an equal. What ensues is a battle of the sexes that is often very funny but also reveals some unfortunate secrets from Betty’s past and forces Albert Sr. to re-examine the unrealistic esteem in which he holds his beloved son.

“Escanaba in Love,” directed by Scott Doughty, is a prequel to Daniels’ previous hit comedy, “Escanaba in da Moonlight,” which was made into a feature film in 2001. Both stories are set in the Upper Peninsula of Michigan – colloquially, it is referred to it as U.P., and therefore its inhabitants are known as “yoopers” – although “Love” is set during the days of World War II, some 40 years before “Moonlight,” and concerns a different generation of Soadys.

Despite being straight-forward, mostly goofy comedies, both flirt with the mystical, suggesting that Escanaba has otherworldly qualities that cannot be explained. “Escanaba in Love” is more grounded in reality than its predecessor, which involved Native American mysticism and a character who claims to have seen a physical manifestation of God, but there are nods to the supernatural in a touching reunion between Albert Sr. and a spirit from his past.

The sequel is also reduced in scope, narrowing its focus to a smaller cast of characters, and the entirety of the action is relegated to the Soadys’ one-room cabin, but the simplicity ends up being a strength. There are a handful of intimate moments – Grandpa’s opening monologue detailing his encounter with the largest buck in Escanaba, for example, or Albert Jr. and Big Betty’s impromptu honeymoon – but “Escanaba in Love” works best as an ensemble piece, and the material really sings when all five characters are simply allowed to interact with one another.

The comedy runs the gamut from broad slapstick and pratfalls (and plenty of flatulence jokes) to rapid-fire one-liners and back-and-forth comic exchanges, and the entire cast skillfully pulls off the physical and verbal gags. This is a show that succeeds or fails based on the talents of its performers, and the actors here are especially strong.

Yet the darker, more bittersweet material that constitutes the second (and more involving) half of the play is just as good, and it’s surprising how well the story veers from humor to heartbreak without appearing strained. A lot of this can be attributed to the performances, which are well-modulated here. The actors bring energy and heart to roles that could have easily come across as undefined backwoods caricatures.

It may not be a particularly refined comedy, but “Escanaba in Love” is a funny, warm-hearted balancing act between farce and drama. It’s a pleasure to be crammed inside the close living quarters of these characters, and if Daniels ever returns to the Soady Deer Camp, it won’t be too soon.