The Reviews are In for The Turn of the Screw! 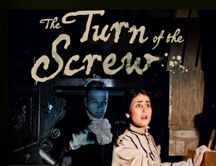 The mind is where the scariest apparitions lurk; “The Turn of the Screw” makes that point in two different ways.

First, this gothically creepy Firth Chew Studio Theatre production proves that neither blood nor butcher knives nor bloated bodies are needed to make the neck hair prickle. Director Susan Hardie uses virtually no props and a minimalist set to turn the Civic’s black box space into a miniature House of Horrors.

This is true “theater of the mind,” using nothing but words, gesture, lights and darkness (mostly darkness) to create an ominous, shadowy world. We never see any ghosts at this lonely country estate. But when we see the governess staring off-stage in horror, believe me, that’s creepier than seeing the ghosts themselves.

Which brings us to the second point. This 1898 Henry James novella is famous for its ambiguity. Those ghosts – and demons – may be lodged firmly inside the governess’  head. It has been debated for 113 years, and it will be debated anew by just about every person who leaves this theater.

Playwright Jeffrey Hatcher’s modern adaptation turns the novella into a two-person play. The intense Laticia Widman plays the governess who has been hired to take care of two young children at a manor house. All other characters, including the Aged Housekeeper, the Creepy Uncle and the Bright-Eyed Little Boy (my descriptions, not the play’s), are portrayed by one actor, in this case, the mesmerizing Doug Dawson.

Mesmerizing, because Dawson throws himself into this role with charismatic relish. His unsettling delight in uttering the word “seduce” in several different contexts, is a lesson in the art of dramatic line-reading. When he asks the governess if he has “seduced” her, it’s with a purr; when he asks the audience, at the finale, if we have been “seduced,” it’s with an air of mischief and subtle menace.

The tall, lean Dawson begins as the cold, calculating master of the estate. There’s something wrong with this man, even beyond his distaste for children. Dawson makes the man smooth, oily and indefinably “off.”

His version of the elderly housekeeper is the opposite: Warm, well-meaning, a little bit dotty, but capable. She’s bent over, walking with an imaginary cane. The fact that she is wearing a Victorian gentleman’s suit seems irrelevant (there are no costume changes). Finally, Dawson’s little boy jumps and fidgets and is full of enthusiasm and energy. Which makes it even more eerie when he talks darkly of being “different” than other children.

Dawson’s intensity is matched nicely by Widman, who begins as a cheerful, enthusiastic job applicant, practically gushing with excitement over her new post. Don’t make the mistake of thinking Widman is overacting – she’s actually planting the seed of a key character trait, nervous hysteria. The governess progresses from over-enthusiastic to overimaginative to, finally, just plain over-the-edge.

The question, at the end, is not whether she’s crazy. It’s whether somebody or some evil force has driven her crazy.

Certainly, Hatcher’s adaptation leans heavily on one possibility – that this virginal daughter of a vicar is a victim of Victorian sexual repression. Hatcher (and Hardie) lean heavily on the sexual overtones. One of the governess’s hysterical attacks resembles a, let’s say, different kind of climax.

I wish Hatcher hadn’t been quite so heavy-handed in this. There are so many other possibilities beyond sexual hysteria. Maybe the governess was being “gaslighted” (driven crazy on purpose) by the master, or even the kindly housekeeper.

Or, maybe, there really were ghosts strolling the grounds of the estate.

I’m leaning toward the simplest solution: The governess was bonkers. But I love the fact that, in 100 years, people will still be debating it.