The Reviews are in for Duck Hunter Shoots Angel 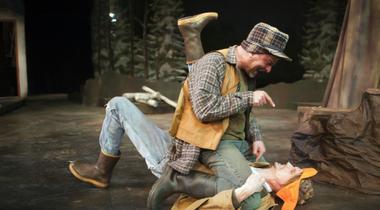 It’s all fun and games until somebody shoots a celestial being in Spokane Civic Theatre’s “Duck Hunter Shoots Angel.”

Kathie Doyle-Lipe directs an applaudable production of the comedy by Mitch Albom, award-winning sports columnist and author of the best-selling books “Tuesdays with Morrie” and “The Five People You Meet in Heaven.”

Albom’s script smartly uses farce, fable and various types of comedy to examine modern life issues, including money, relationships, faith, race and culture. It also presents four lead characters that are interestingly round as they progressively shed the layers of stereotypes that shroud them.

The bulk of the story unfolds in an Alabama swamp (well replicated by set designer David Baker), where country bumpkin brothers Duane (Mark Pleasant) and Duwell (Doug Dawson) – known all over town for their lousy duck-hunting skills – believe they have accidentally shot down an angel instead of waterfowl. As word of the incident spreads to tabloids all over the country, a disgruntled journalist from the East Coast, Sandy (Michael Hynes), and an uneager photographer, Lenny (Jarvis Lunalo), head south to get the
story first.

Certain scenes seem slow-going, particularly the opening when Sandy gripes about writing “crap” stories for The Weekly World and Globe – a biweekly, National Enquirer-like publication – and in his lamentations of regret to an invisible, omniscient therapist known as “The Voice” (played by Brad Picard). But the show’s pace instantly picks up the second Pleasant and Dawson (the clear stars of the show) appear.

Pleasant and Dawson deliver a harmonious double act, fully committed to their roles as God-fearing and panic-stricken hillbillies. Their slapstick scuffles and boisterous bickering are like Joe Pesci and Daniel Stern as the infamous burglars in the ’90s blockbuster “Home Alone.”

Duane, the elder brother and a know-it-all, relentlessly coerces the gangly, seemingly dimwitted and more sensitive Duwell into following his uncertain lead. His constant spouting of misused words in the thickest Southern accent imaginable is hysterical. With concerns about heart problems, he cries, “I’m likely to have a corollary!” And he describes the last Biblical battle between good and evil as “Armagetcha.”

There are some thought-provoking intersections between the four main characters – notably in dialogue between Lenny and Sandy, Duane and Lenny, and Sandy and Duwell. The effect we have on each other’s lives is a recurring theme in Albom’s writing and certainly plays a part here.

Although the comedic dialogue, multifaceted characters and air of mystery in Albom’s script are appealing, its bumpy transitions to more serious moments seem convoluted and hard to piece together at times.

Yet the revelations that occur as characters cross each other’s paths are concepts that the audience will easily identify with and mull over long after the show.