The reviews are in for BINGO! 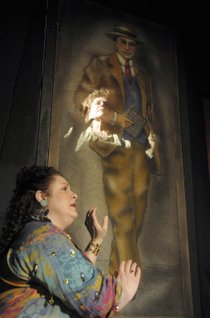 Occurring on a dark and treacherously stormy night in a small town, the story centers on three middle-age friends and bingo addicts – Vern (Phedre Burney-Quimby), Patsy (Maria Crabb) and Honey (Marnie Rorholm) – determined to make it to the VFW for bingo night, come hell or high water.

As the story flashes back from 2003 to 1988, the audience also learns about the trio’s former friend, Bernice Boodalay (Janice Abramson) and the events leading up to their friendship’s demise.

All seven members of the cast play the show’s wacky characters to their fullest potential.

Burney-Quimby is convincing as Vern, the overbearing bingo hall bully and most diehard of the players. When she discovers someone else sitting in her preferred seat at the hall, she tyrannically declares, “I am a lifer and this is my cell you’re sittin’ in!” Even her attempts at sincerity are insulting as she tells Honey that she finds her stupidity “endearing.”

The stage presence of Moira Moore as Minnie, the authoritative bingo hall director, and that of Laura Chamberlain as Bernice’s perky and doe-eyed daughter, Alison Boodalay, are undeniable. Chamberlain flaunts her take-notice vocal abilities in her solo, “I’ve Made Up My Mind,” and gives a hilarious musical impression of Nurse Ratched, the infamous “One Flew Over the Cuckoo’s Nest” character, in “Ratched’s Lament.”

And while an array of sound effects (managed by Amanda Kern) ups the show’s comedic ante, a lack of microphones makes certain actors’ lines either inaudible or drowned out by the orchestra.

Although defined as a musical comedy, music, ironically, plays only a small role in the show. While much of the musical score is short and unmemorable, the spontaneity of the cast’s interaction with the audience (you never know where an actor will pop up next) is as entertaining as a taping of “Saturday Night Live.”