The Lifespan of a Fact, a play about artistic license, gets its regional premiere at the Civic 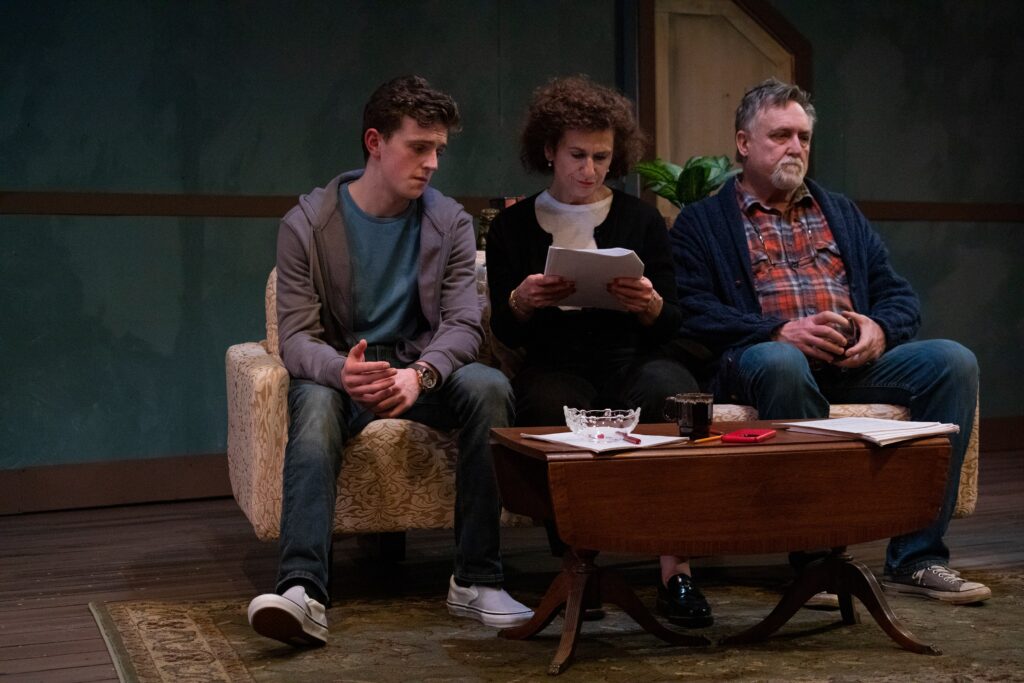 These are the facts: In 2003, a writer named John D’Agata submitted an essay to Harper’s Magazine. The piece centered largely on Levi Presley, a 16-year-old boy who had leaped from the observation deck of the Stratosphere Hotel in Las Vegas the previous year. Presley’s suicide served as a case in point for D’Agata’s broader examination of the city’s prioritization of tourist dollars over human lives.

Harper’s declined the essay on account of the creative liberties that D’Agata had taken with his source material. Two years later, the essay was picked up by The Believer, where it was ultimately published as “What Happens There” in 2010. In that multiyear span between acceptance and publication, a recent college grad named John Fingal attempted to cross-check every verifiable piece of information it contained.

Yes, these are the facts. But what truth do they reveal or obscure?

That question underpins The Lifespan of a Fact, the book that dramatized the ethical and philosophical debate that played out between D’Agata and Fingal (and took its own creative liberties in doing so). Structured like an epistolary novel in the digital age, The Lifespan of a Fact puts D’Agata on the side of artistic license, defending his choice to write, for example, that Las Vegas has 34 strip clubs because it’s more rhythmical than 31. In the opposing corner is Fingal, who fusses over details like the number of ounces in a typical bottle of water.

Jeremy Kareken, David Murrell and Gordon Farrell’s stage adaptation of The Lifespan of a Fact opens this weekend in the studio space of the Spokane Civic Theatre. This is the play’s regional premiere following a 2018 Broadway debut that saw Daniel Radcliffe, Bobby Cannavale and Cherry Jones cast as the respective trio of characters: Fingal, D’Agata and an invented editor-slash-mediator named Emily Penrose.

In this Civic production, Jamie Flanery is playing D’Agata.

“His perspective is that he’s not a journalist, and that facts can get in the way of the truth. He’s a guy who’s very passionate, a writer who considers himself an artist. He wants to show this boy [Levi Presley] in a light that does justice to his life, not to just report about him jumping off a casino tower,” Flanery says.

Fingal, played here by Nicholas Griep, is a supreme stickler whose quest for accuracy — at least in D’Agata’s view — threatens to strip his writing of its color, fluidity and rhetorical power. The referee to their sparring match is Deborah Marlowe as Penrose.

Does this ideological tug of war at the heart of The Lifespan of a Fact successfully translate from the page to the stage? Director Marianne McLaughlin thinks so.

“You’re seeing more than what you read in that book because you’re also seeing them as human beings,” McLaughlin says. “There’s this constant argument, but on the other hand, there are moments when they do reach each other, even if they’re just small moments.”

“It would be easy to make this play about two people yelling at each other for 70 minutes,” Flanery adds. “But I think the most interesting shows are things where somebody might be a villain, yet there’s something you still like about them. Obviously, there are things we like about these two men, and there are things that become exposed throughout the story. There’s a lot at stake for both of them.”

“And,” McLaughlin says, “there’s the 16-year-old boy who jumped from the Stratosphere Hotel. What makes a young man go and commit suicide? Ultimately, the play goes full circle and comes back to that. At least, that’s what we’re trying to accomplish.”

Amid all this, Flanery sees the perennial quandary of how much art can deviate from reality while still claiming to illuminate it.

“The analogy I bring up is that it’s not any different to a Renaissance painter being commissioned to paint a king or a monarch and being told to make them look good,” he says.

“As we look back, throughout all of time people have embellished stories. And this feels so contemporary in terms of social media and journalism and media outlets: What’s real and what isn’t?”

McLaughlin adds that the very existence of The Lifespan of a Fact speaks to one of the points that it’s making, namely, letting some particulars slide in order to shed light on something more urgent or significant. The actual five-year delay in the essay’s publication becomes five days in the play. The settings — an editorial office, D’Agata’s home — are invented for convenience or dramatic effect. The casting allows for a wide range of ages when, in reality, Fingal and D’Agata were in their 20s and 30s at the time.

“The play is based on a true story, but it itself is a fiction. The playwrights give you some leeway in age because they don’t want it to be like you’re doing a historical character. Somebody wrote this story, and his name was John D’Agata,” she says, but the incidental details surrounding that shouldn’t muddy the larger questions The Lifespan of a Fact is trying to raise.

“If this causes people to talk about what they thought and what that made them feel like, that’s great. That’s the purpose. You want people walking away feeling like it’s making them think about things in their world and where we’re going.” ♦