The Civic is resuming live theater with The Play That Goes Wrong, a show about the pitfalls (and pratfalls) of live theater 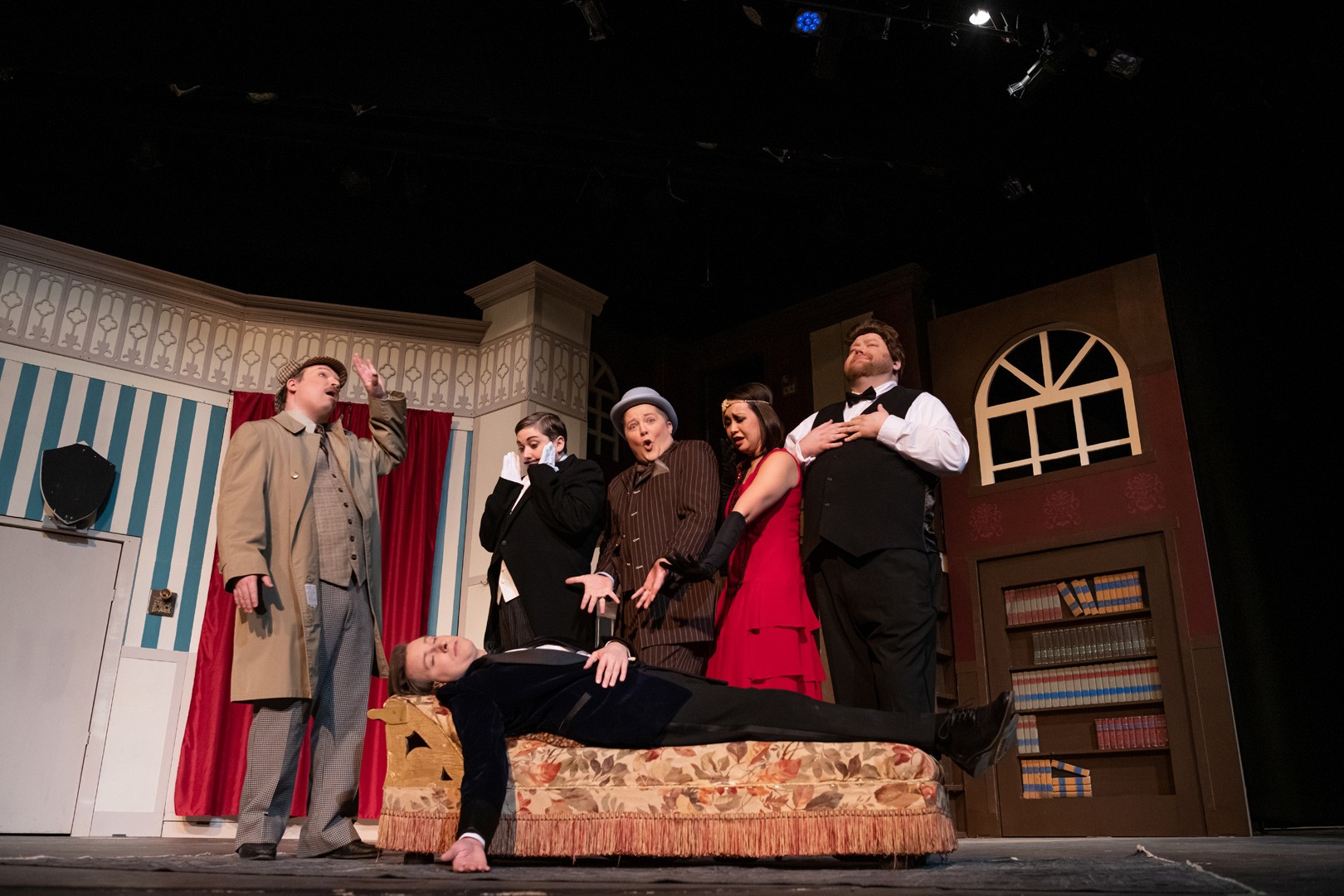 After a nearly two-year hiatus brought on by the pandemic,Spokane Civic Theatre is resuming live productions with the regional premiere of The Play That Goes Wrong, a comedy that promises exactly what its title says.

Written by Henry Lewis, Jonathan Sayer and Henry Shields, the play captures the opening performance of the Cornley Drama Society’s The Murder at Haversham Manor, a fictitious Mousetrap-style murder mystery as rickety as the set itself and as shaky as the actors’ grasp of their lines. The real-life audience becomes increasingly aware of just how wrong things are going for the play-within-a-play when the amateur troupe compounds the usual opening-night hiccups with a furious succession of flubbed dialogue, overacting, missed cues and their personal idiosyncrasies.

“It’s a good choice for coming back,” says director Jean Hardie. “The cast is small, and I think the thought was that an ensemble piece, rather than something huge, like Funny Girl, might be a smarter move” on account of pandemic precautions. She’s also of the opinion that a goofball farce will strike the perfect tone after the stresses of the past couple of years.

But however right The Play That Goes Wrong might seem in format and spirit, “the demands of the scenery are large,” Hardie says. That led to some initial reservations. How would they pull off some of the trickier — and, quite frankly, dangerous — gags involving unreliable floors and tumbling props? Would the actors be able and willing to perform the pratfalls that the play calls for?

“Every actor is in some way involved in either falling or fighting or climbing or swinging around on things,” she says.

Set designer Denny Taylor managed to solve the mechanical challenges of carefully controlling what appear to be accidents. And auditions proved that there was no shortage of actors eager to answer slapstick’s call. The cast of eight includes local stage veterans like Kathie Doyle-Lipe and Kelly Hauenstein as well as relative newcomers like Bryce Clifton and Micah Sybouts.

For Sybouts in particular, two years away from the stage seems like nothing. The Play That Goes Wrong is her first time treading the boards in more than two decades.

“I’d been thinking about trying to get back into theater for a long time,” she says, “but I didn’t say anything to my husband. Back in November, we were sitting there one morning, and he goes, ‘Have you ever heard of the Civic Theatre?’ I said, ‘Yeah, of course.’ He was on Facebook, and KHQ had posted a story about Civic holding open auditions for their first play since the pandemic hit.”

He suggested that she give it a shot. Sybouts, who hadn’t performed since her days at Rogers High School, took it as a “sign from the universe.”

“Of course, I went into the whole process knowing that I was not going to get a part.”

“I’m playing a woman who’s been cast as a male butler, and she’s not terribly great at being male. One of my character’s traits is also that I can’t remember certain words. I have them written on my hands, and I pronounce each one of them shockingly badly, to the increasing consternation of my fellow actors.”

Sybouts points out that one of the more amusing aspects of her return to theater is that she was chosen for being good at acting badly. Hardie says that ability actually forms the crux of the play: “They have to achieve badness in the very best way possible.”

“As a director, one of the challenges for me was to block it badly well,” she laughs, “blocking” being the process of planning actors’ movement on the stage. “It’s a chance to take all the things you’re not supposed to do and do them purposefully, hoping that the audience understands why they’re doing things the way they are.”