'SUDS' Will Have You Singing Along

SUDS is a Trip to Another Time

This week, SUDS rehearsal in the Firth J. Chew Studio Theatre was quite the fun experience! 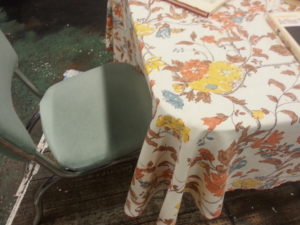 Just a taste of the grooviness on the set of ‘SUDS’! (We’d show you more, but we don’t want to give it away!)

Walking into the space, there were a few small groups scattered about, practicing chords, discussing notes, and placing props on set. The mood in the Studio was light,and it was apparent that this was going to be a fun cast and production.

Simply taking a seat, and breathing in the set and props begins to transport one back to the past – the colors, fabrics, and design definitely scream the 1960s!

If you aren’t familiar with the play, SUDS opens with bright-eyed, pie-in-the-sky Laundromat attendant, Cindy, on her birthday. She mentions that her life is grand, and that nothing can go wrong on someone’s birthday… Well, it’s all peachy until the postman shows up and rains on her parade!

This was the cast’s first complete run-through of the performance, and the months of practice felt like it was paying off. The cast members play well off of each other, and the facial expressions that Charles Fletcher throws around are spot-on – and hilarious.

Inside the Black Box 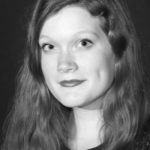 For those who haven’t been to the Firth J. Chew Studio Theatre space before – it’s what is commonly called a “black box theatre”. This means the space is more intimate than a traditional stage; our’s seats 85. The audience is so close to the action that they feel part of the production.

Krista Vaughn, who plays Cindy (the birthday girl), shared that “there are some unique challenges that come with performing in such a space…particularly acting to three sides rather than just one, but they all add to the experience. For a show like SUDS, which takes every opportunity to directly engage its audience, I think a black box is the best possible place to perform it.” 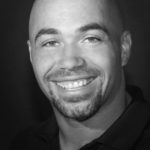 This “rocking 60’s musical”is sure to have you tapping your feet to old favorites, and director Delvone Bullis (in his Studio debut!) invites you to singalong! A steady stream of hits are highlighted in this musical – a few to look forward to include: Please Mr. Postman, You Don’t Own Me, It’s My Party, Secret Agent Man, Doo Wah Diddy, and there are a lot more where that came from! So much so that we’ve created a playlist for you to brush up on tunes from this production, so you’ll be ready!

When asked what her favorite part about participating in SUDS was, Krista had this to say:

“…it’s probably the flexibility I’ve been granted as an actress. Part of that is the writing, and part of it is our wonderful director (Delvone Bullis). With comedy, you can go so many different directions, and I’ve just loved being able to stretch myself and explore the different possibilities this script presents.

SUDS is a melodrama, which means I have to hold nothing back, and it’s quite the fun, freeing experience. And, of course, I’ve always loved 60s music! The Beatles are my heroes!”

Why should you go see SUDS?

“SUDS is just plain ‘ol fun! It’s got a great cast and crew, a hilarious script, and some of the catchiest songs ever written. I can’t think of a single person who wouldn’t enjoy themselves if they saw it.” – Krista Vaughn (Cindy)

Get ready for a good time! We’ll see you there!

A quick note for families: There are a few moments of adult themes (namely, a failed suicide) and occasional innuendos, most of which will likely make no sense to children, but parents – we differ to your discretion. 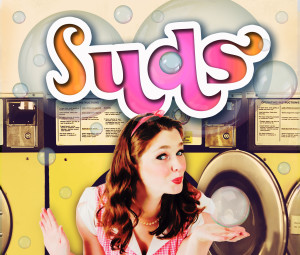 Sponsored in part by
R.H. Cooke & Associates and Hotel Ruby