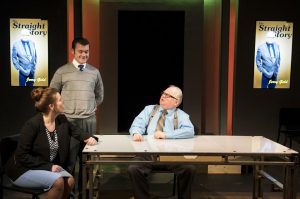 Depending on how it’s done, incorporating TV screens and other multimedia elements into a live theater production could help or hurt a show.

On one hand, digital elements, when used correctly, can help tell the story in a way that tangible props simply can’t.

On the other hand, if audiences wanted to watch TV, they would’ve stayed home, right?

Playwright Jeffrey Jackson’s “Two Point Oh,” a play in which the main character only ever appears on screen, relies almost entirely on the use of technology, which means a lot is riding on the relationship between the multimedia and live elements.

His widow Melanie is still mourning when she receives a package from her husband containing a program he created before he died, “Elliot 2.0,” a digital version of himself programmed with thousands of hours of recorded thoughts and speech.

“Elliot 2.0” can answer questions, hold conversations, share memories and, time will tell, maybe even grow in intelligence. But, the characters wonder, is he alive?

Wooley’s choice to have Tipton stand onstage in place of the screens early in the rehearsal process so the actors could build connections was really smart, as, when it came time for Tipton to appear on screen, each character’s relationship with Elliot seemed authentic.

Elliot could have very easily come off as flat, but Tipton’s portrayal made the character, though digital, seem as lifelike as the actors onstage.