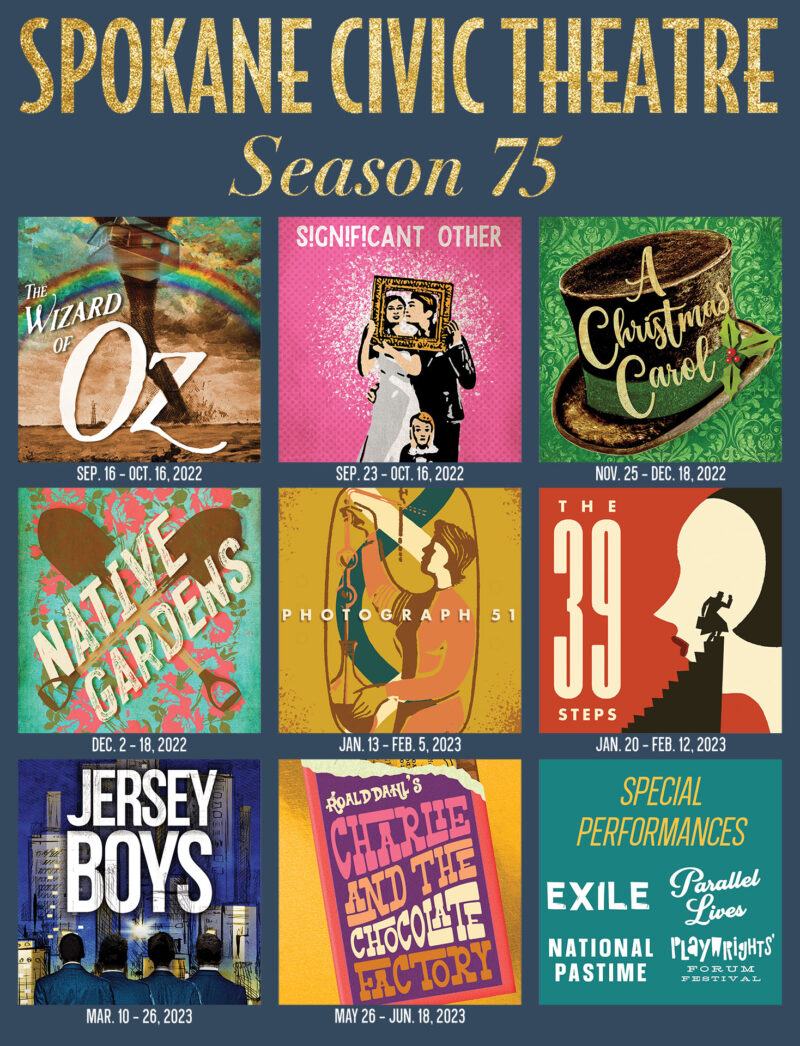 Going into their 75th season, Spokane Civic Theatre’s 2022-23 program will include five main stage productions, three studio productions and three special productions. With a total of 178 scheduled performances, the season has something for the whole family.

With plans to remodel the theater on hold until fall 2023 for a myriad of reasons – chief among them, an attempt to avoid competing with other major local projects for materials – Spokane Civic Theater executive director Jake Schaefer jumped at the chance to extend the season.

Schaefer reached out to licensing companies, looking for shows recently made available. He couldn’t believe his luck when “Jersey Boys” and the Warner Bros. stage adaption of “Charlie and the Chocolate Factory” came up.

Tickets to “Jersey Boys” and “Charlie and the Chocolate Factory” are currently available to new and current members only with the “Golden Ticket” mainstage package. The Golden Ticket Membership is $150 for adults and $135 for Seniors/Military and includes all five Season 75 Main Stage shows. Single tickets go on sale on Sept. 17.

All shows begin at 7:30 p.m. on Thursdays-Saturdays and 2 p.m. on Sundays unless otherwise noted.

Main stage
Sept. 16 – Oct. 16, “The Wizard of Oz.” Based on L. Frank Baum’s classic tale, “The Wizard of Oz” features iconic music from the 1939 MGM film of the same name. Directed by Kathie Doyle-Lipe with music director Henry Mcnulty, this stage adaptation follows a young girl named Dorothy as she travels from Kansas, over the rainbow and onward to the fantastical Land of Oz. Note: Performances on Sept. 24 and Oct. 8 will begin at 2:00 p.m.

Nov. 25 – Dec. 18, “A Christmas Carol.” Written by Barbara Field and directed by Bryan D. Durbin and Kearney Jordan, this Christmas classic takes the miserly Ebenezer Scrooge on a harrowing journey down memory lane that reveals where he started, what he has become and the fate he has secured if nothing changes. “Racked with fear and remorse,” Scrooge “sets out on Christmas Day to bless with his newfound generosity all those whom he has neglected and abused.”

Jan. 20 – Feb. 12, 2023, “The 39 Steps.” A comedic parody, “The 39 Steps” calls on just four actors to bring the entirety of Alfred Hitchcock’s 1935 film of the same name to the stage. Directed by Heather McHenry-Kroetch, the play follows a man who finds his boring life suddenly turned upside down by a mysterious woman who claims to be a spy.

Mar. 10 – 26, 2023, “Jersey Boys.” Based on the lives of Frankie Valli & the Four Seasons, “Jersey Boys” is a behind-the-music story of “four blue-collar kids who became one of the greatest successes in pop-music history.” Along the road to stardom, the show features some of the band’s greatest hits including “Sherry,” “Big Girls Don’t Cry” and “Can’t Take My Eyes Off You” among others.

May 26 – June 18, 2023, “Charlie and the Chocolate Factory.” Based on Roald Dahl’s novel of the same name, this musical adaption of “Charlie and the Chocolate Factory” features an original score by Marc Shaiman, lyrics by Shaiman and Scott Wittman, and a book by David Greig. As the story of Charlie Bucket and his magical journey through Willy Wonka’s factory unfolds, the show pays homage to the 1971 motion picture in songs by Leslie Bricusse and Anthony Newley including “Candy Man,” “I’ve Got a Golden Ticket” and “Pure Imagination.” The show will be directed by Troy Nickerson with music director Henry Mcnulty.

All main stage performances will take place on the Margot and Robert Ogden Main Stage. Tickets: $35 for adults; $30 for military and seniors ages 65 and older; and $10 for children and students ages 3 to 25.

Studio
Sept. 23 – Oct. 16, “Significant Other.” For Jordan Berman, being in love is easier said than done. Waiting around to meet “Mr. Right,” he’s been able to ward off the lonely nights with a trio of girlfriends. But when singles’ nights start turning into bachelorette parties, Jordan realizes “the only thing harder than finding love is supporting the loved ones around you when they do.” This show is rated PG-13 due to adult content, language and references.

Dec. 2 – 18, “Native Gardens.” Initially welcomed by their new neighbors, an attorney on the rise and his pregnant wife suddenly find themselves in the middle of a friendly-disagreement-turned-backyard-brawl. This show is rated PG-13.

Jan. 13 – Feb. 5, 2023, “Photograph 51.” One of the great scientists of the 20th century and a fiercely independent woman, Rosalind Franklin became the first to map the contours of the DNA molecule. In this “humorous and moving portrait,” a group of physicists relives her path to success, revealing unsung achievements along the way. This show is rated PG-13.

All studio performances will take place in the Firth J. Chew Studio Theatre. Tickets: $25 for adults; $10 for students ages 5 to 25.

Special Performances
Oct. 28 – Nov. 6, “Exile.” Retired from the military, Augie returns home for the first time in 40 years to attend his high school reunion. While there, an old friend encourages Augie to break into his childhood home to retrieve a long-lost but valuable baseball card. Written by Spokane Civic Theatre resident playwright Bryan Harnetiaux, “Exile” follows Augie through the ensuing turmoil as he “stirs the ashes of his troubled childhood in search of meaning, if not peace.” Staged in the Firth J. Chew Studio Theatre, this show is rated PG-13. Tickets: $25 for adults; $10 for students ages 5 to 25.

Feb. 17 – 26, 2023, “Parallel Lives.” Featuring Melody Deatherage and Kathie Doyle-Lipe, “Parallel Lives” opens as two supreme beings begin hatching their plan for humanity at the beginning of the world. Staged on the Margot and Robert Ogden Main Stage, this show is rated PG. Tickets: $25 for adults; $10 for students ages 5 to 25.

Rescheduled for spring of 2023, final dates remain to be announced for “National Pastime.” Written by Harnetiaux and last staged at Civic in 1998, “National Pastime” explores the impact of trailblazing baseball star Jackie Robinson on the sports world and the world beyond. New York City-based director and professor Pat Golden will direct.