Yesterday, actors from Spokane Civic Theatre held their first rehearsal at the historic Martin Woldson Theater at The Fox, in preparation for this weekend’s performance of Les Misérables. This production is quite exciting, as you probably know, because it is the first time Civic will be performing with the Spokane Symphony!

This collaboration of two of Spokane’s vibrant arts organizations is the first of its kind in the area! Bringing together some of the most talented musicians, vocalists, and actors in Spokane makes this a uniquely special experience.

The background and props had been transported to The Fox earlier in the day, and the stage crew was setting and adapting furniture arrangements on this new, larger stage. By the time cast members began to arrive, the set was already coming to life. 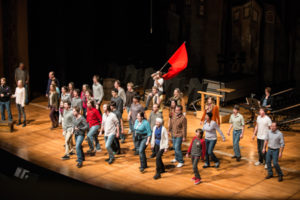 Making the evening journey downtown to The Fox was a bit cumbersome, as snow had engulfed most of Spokane throughout the day. Despite the extra effort it took to get to rehearsal, each bundled actor made his or her way to this renowned stage, many for the first time.

All prior thoughts of the day and the snow seemed to become immediately lost as the grandeur and scale of The Fox, and this performance, were taken in.

Gasps and various exclamations were heard: “Oh, wow!” “Woah!”, and my favorite from one young actress: “Oh my gosh. I’m glad we lived this long to make it this far.” Another cast member, noting how much space the production now had, mentioned that they would just have to add some dancing! As more people entered, the excitement became increasingly tangible.

The cast ran through vocal warm-ups, following which they were introduced to Joe, the Fox’s extremely knowledgeable Stage Manager. Then, after ground rules, policies, and directions to the nearest restroom were given, Director Tia Wooley sent the actors to their places.

Listening to the cast members sing, even during warm-ups, was made even more enchanting when matched with the amazing acoustics at The Fox.

A few venue-change wrinkles were being ironed out while the actors were on stage: retiming the movements of large pieces during set changes, boat-like noise from sound system feedbacks, and small lighting mishaps. All-in-all these were slight obstacles to overcome, and were conquered quickly, skillfully, and in a good humor.

Today, final costumes and other treasures make the journey to the Martin Woldson Theater at The Fox.

More behind-the-scenes news is on the way from Civic leading up to this exciting Symphony and Civic inaugural performance!

In the meantime, get your tickets to see it for yourself!