The Symphony and Civic Together 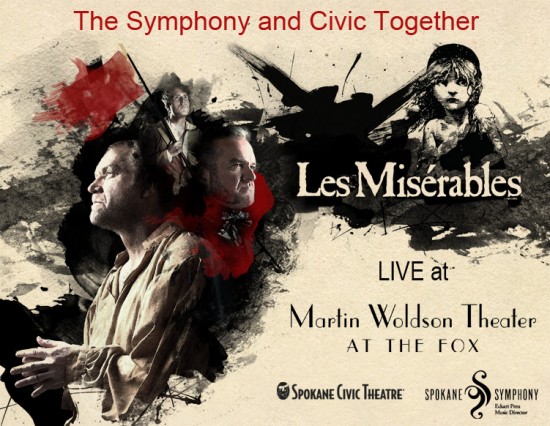 SPOKANE SYMPHONY AND CIVIC TOGETHER:
Les Miserables Live at Martin Woldson Theater at The Fox

“Most of the original cast will be reprising their earlier roles and the show will be restaged to fit The Fox. It will include set pieces, props and costumes from Civic’s Les Mis production,” Humes said. “We hope our faithful fans and new audiences will join us to enjoy this amazing undertaking.”

“The community was extraordinarily impressed by the caliber of Civic’s Les Mis performances this fall,” Nienhouse said. “The Symphony is excited to join with Civic to bring Spokane audiences an enhanced experience with our full Symphony orchestra and the fabulous ambience our historic theater can provide.”

Civic presented Les Misérables as its season opener last September. The show’s instant popularity with Spokane audiences led to sold-out performances and prompted the Spokane Civic Theatre to add another weekend to satisfy crowds. Before the run ended, Civic’s Jim Swoboda, who received raves for his portrayal of Jean Valjean, approached the Symphony to suggest a collaboration to present the show on a grander scale at the much larger Martin Woldson Theater at The Fox with the Symphony’s full orchestra. (Civic accommodates 339 people in its hall, while The Fox seats 1600. The Civic’s show presented music by fourteen musicians; the Symphony will add the power of its full orchestra to accompany Civic’s singers and actors.)

Swoboda said he came up with the idea of partnering with the Symphony while chatting on the phone with director Doug Webster. “We both wondered if the symphony would even be open to it.  I happened to be parked outside the symphony offices and decided to put some money in the meter and walk in to ask,” Swoboda recalled.  “[Symphony Executive Director] Brenda Nienhouse happened to be in and loved the idea.”

The Symphony and Civic’s collaboration represents a new milestone in cooperation among major arts organizations in Spokane.

“We are proud to announce this significant event in Spokane’s arts community and history,” Nienhouse said. “We have great cultural organizations here in Spokane, and it’s a joy to be able to showcase three of them with this collaboration—the Civic, the Symphony and Martin Woldson Theater at The Fox.”

“Bringing together some of the most talented musicians, vocalists and actors in Spokane is an exciting experience, and providing an event with the cooperation of both of our organizations is very rewarding,” Humes said. “Sharing it with our community is a privilege and an honor.”

“We knew that there would be steps to climb to make the show possible and the Spokane Civic Theatre and Spokane Symphony have really come through,” Swoboda added. “This should be an amazing event!”

Based on Victor Hugo’s classic novel, Les Misérables is the longest running musical in the world. In 1987, the original Broadway production won eight Tony Awards, including Best Musical and Best Musical Score and was honored with many other awards. Set in early 19th-century France, it features the classic songs “I Dreamed a Dream,” “On My Own,” “Stars,” “Bring Him Home,” “Do You Hear the People Sing?,” “One Day More,” “Master of the House” and many more.

Tickets for “The Symphony and Civic Together: Les Misérables Live at Martin Woldson Theater at The Fox,” go on sale tomorrow, Wednesday, December 18 at noon, and range from $40 to $125. Those who wish to enhance their performance experience can purchase Golden Circle seats in the top $125 price point, which entitles them to a champagne reception with select cast members in the Founders’ Gallery directly following the performance. Organizers say that all profits from the shows will be used to bolster the financial footings of Spokane Civic Theatre, the Spokane Symphony and Martin Woldson Theater at The Fox.