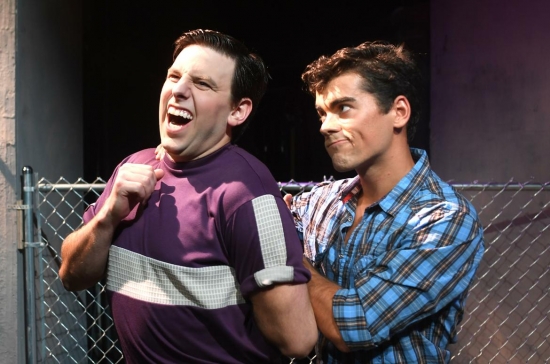 A story as classic as “West Side Story” carries with it certain expectations.

There’s love, drama and action, all intertwined with beloved songs like “Cool,” “America” and “I Feel Pretty.”

For the most part, Spokane Civic Theatre managed to meet those expectations, save for a few hiccups.

The Lenny Bart-directed “West Side Story,” inspired by William Shakespeare’s “Romeo and Juliet,” explores the rivalry between the Jets, a white gang, and the Sharks, a Puerto Rican gang, in mid-1950s New York City.

Tony (Duncan Menzies) is a former member of the Jets and best friend of gang leader Riff (Preston Loomer). Maria (Maddie Burgess) is the sister of Bernardo (played by Arnoldo Heredia at this show), who leads the Sharks.

Menzies’ voice took a couple songs to really warm up, but by the time he got to “One Hand, One Heart,” a duet with Burgess, his voice moved effortlessly between strong and proud and sweet and tender, depending on the tone of the song.

Sixteen-year-old Burgess brought the perfect amount of bright-eyed curiosity to the character of Maria.

In the dance at the gym, for instance, Burgess stood off to the side, tentatively recreating the dance moves she saw the Jets and the Sharks execute.

It was a simple moment, but it perfectly illustrated someone still finding their footing in America a month after leaving Puerto Rico.

Burgess’ voice was pristine throughout the show, and there’s no doubt she has a long theater career ahead of her…