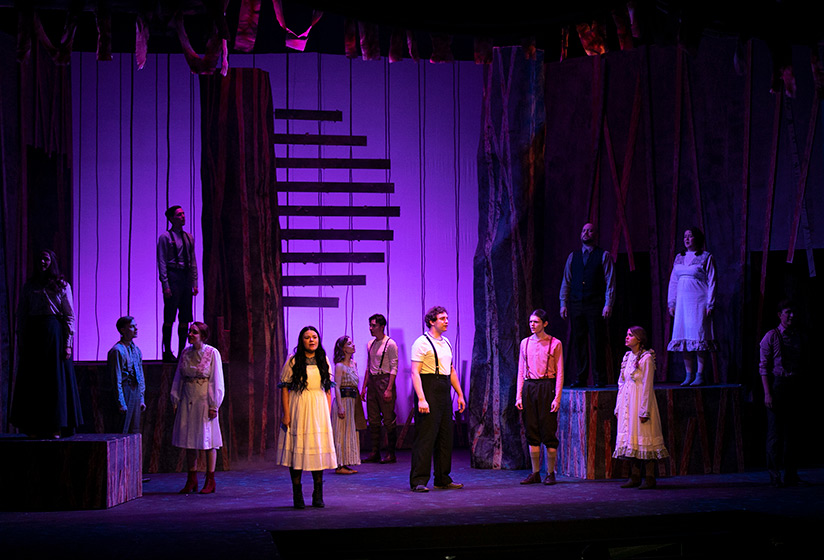 In the program for Spokane Civic Theatre’s production of “Spring Awakening,” the phone numbers for a domestic violence helpline, the National Suicide Prevention Lifeline and the Trevor Project are listed above a warning to audiences.

“ ‘Spring Awakening’ contains serious material that may be inappropriate for some audience members due to strong content, language, sexual situations and violence,” the note reads.

Though the subject matter isn’t as light as the title might suggest, “Spring Awakening” drives home the point that the issues teens dealt with in 1891 Germany, when and where the musical is set, still affect teens around the world today.

“Spring Awakening” follows a group of students as they navigate the treacherous road from adolescence to adulthood, a road paved with big lessons, big decisions and even bigger consequences.

“Spring Awakening” is based on the play of the same name by Frank Wedekind. The musical features a book and lyrics by Steven Sater and music by Duncan Sheik. Civic’s production is co-directed by Sarah Dahmen and Jake Schaefer and music directed by Henry McNulty.

As Wendla Bergmann, Elizabeth Martin is a jewel. Her speaking voice is sweet, so as to convey Wendla’s youth and innocence, but her singing voice is strong and full of emotion.

Skipper will surely become a familiar face on the Civic stage, as he commanded the stage in each of his scenes, whether singing (songs like “All That’s Known” and “Left Behind,” plus “The Word of Your Body” in a great duet with Martin) or challenging the adults in his life.

His reaction during a moment in the cemetery near the end of the show made for a touching moment.

Having seen Jonah Taylor, who stars as the always nervous Moritz Stiefel, in a handful of productions before, I knew that I could expect strong singing and expressive, emotive acting, and I wasn’t disappointed, especially while he sang “Don’t Do Sadness.”

Aubree Peterson, who recently appeared in Civic’s “Young Frankenstein” as lab assistant Inga, stars as Ilse, a young woman who ran away to an artists’ colony to escape an abusive home.

This is the third production that I’ve seen with Peterson, and she continues to impress with her ability to shapeshift and fully embody each role.

Peterson and Kalla Mort (Martha), in her Civic debut, shared one of the most powerful moments of the show while singing “The Dark I Know Well.”

The young women and men who filled out the cast of students, including Brianna Lynn (Anna), Micaela Ackermann (Thea), Matthew Gerard (Georg/Dieter) and Peyton Torchio (Otto/Ulbrecht), all of whom were making their Civic debut, helped to paint a bigger picture of life as a teen by sharing hard-to-hear details about their characters’ lives and those of the main quartet.

Jacob Carruthers (Hanschen/Rupert) and Dylan Brown (Ernst/Reinhold) shared a particularly sweet moment before singing “The Word of Your Body (Reprise).”

Rounding out the cast, Dahmen and Danny Anderson portrayed every adult role, including parents, teachers, a doctor and a priest. With the help of costume changes, they were able to change their voice and mannerisms to help differentiate each character.

“Spring Awakening” has a great score that mixes classical elements and modern rock, and McNulty and the orchestra handled it with ease.

It was slightly jolting to the ear when some of the characters in a scene (usually teachers or parents) had a thick German accent and others (the students) didn’t, but that subsided as the musical continued and I got wrapped up in the story.

In their director’s statements, Dahmen and Schaefer touch on the idea of empathy and the importance of taking time to try to understand someone else’s situation instead of immediately judging.

“The actors and audience alike can listen to another person’s story, even if it makes us uncomfortable,” Dahmen wrote. “We can try to gain more understanding of others, even in our differences. We can continue to listen to those we might otherwise shut out, or shut down. We can remain open.”

It’s hard to say how a little empathy would have changed the lives of the characters in “Spring Awakening,” but there’s no doubt that it helps teens today who are experiencing similar troubles.