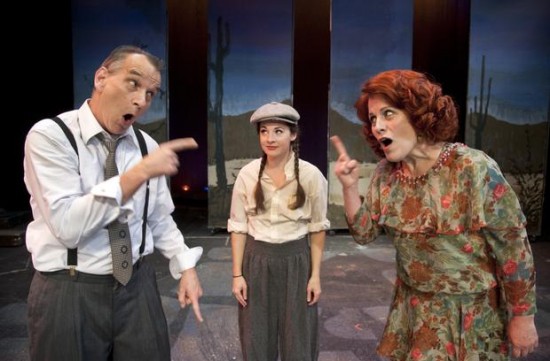 "Spokane’s Civic Theatre premiered its version of the Broadway staple last weekend, and it’s as bold, flashy and occasionally frenzied as the deeply troubled characters it chronicles.

Directed by Troy Nickerson, it’s a huge production: The story spans longer than a decade and across several cities. The cast features 32 credited actors (as well as a real dog and a lamb) and the whole thing has to glide along with the unwavering enthusiasm of a tenacious vaudevillian.

The show itself begins as Louise and June are young and quickly flashes forward: Ten years later, they’re performing the same wheezy numbers, with June (Brie Cole) still pretending to be 9 years old and tomboyish Louise (Aubrey Shimek) relegated to hiding inside a cow costume. Mama Rose, played terrifically by Marianne McLaughlin, is determined to make her daughters stars, and her persistence is fueled by equal parts mania and insecurity."

"The most effective aspects of the show are Mama Rose’s shattered relationships, and how those fallouts contribute to her relentless and often irrational drive. Thomas Heppler is very good as Mama Rose’s potential beau Herbie, who makes a futile attempt to tether her with commitment; his final scene, where he confronts Rose with the reality of her situation, is deeply affecting. And [Aubrey] Shimek [Davis], as the burdened Louise, has the largest arc of the cast, and she’s both appealing and poignant in the role."