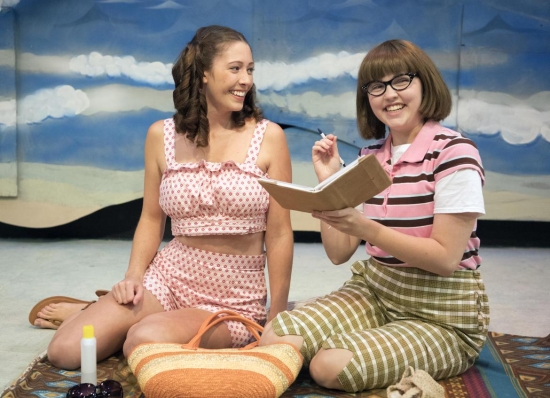 If you’ve watched any of the numerous beach party movies from the ’60s, you’ve seen these characters before. The gawky girl and her nerdy best friend, the too-cool-for-school surfer, the concerned mother. But you haven’t seen those characters like they’re presented in Spokane Civic Theatre’s “Psycho Beach Party.”

The gawky girl who turns into a voracious vixen at the drop of a hat, the nerdy girl who references the likes of Nathan Hale and the Lafayette Escadrille in her diary entries, the too-cool-for-school surfer who is submissive to powerful women, and the concerned mother who turns into a threat in a snap. “Psycho Beach Party” takes what was so popular about the beach party movies and turns it on its head, adding elements of a murder mystery a la Alfred Hitchcock. In doing so, the Jerry Sciarrio-directed play, written by Charles Bosch, adds adult humor to Halloween.

Scenic and lighting designer David Baker gets a lot of credit for setting the beachy scene as soon as audience members step into the Firth J. Chew Studio Theatre. A beautifully constructed boardwalk leads to the sandy beach and a backdrop of both waves and sky. And the “ocean mist” during the surfing scene was a great touch.

Rushele Herrmann is fantastic as Chicklet Forrest, who has multiple personality disorder. Though Chicklet is, for the most part, a gawky teen who wants to hang with the surfers, she is also Ann Bowman, the vixen, Tylene, a brassy grocery store cashier, a young girl, a man named Steve, the law firm of Edelman and Edelman, and more. Herrmann changes both her vocal and physical characteristics to match each personality, and the scene in the second act in which her personalities converse with each other is impressive due to her ability to quickly change from one to another.