REVIEW: Kenneth Lonergan’s ‘This Is Our Youth’ is as relevant as ever 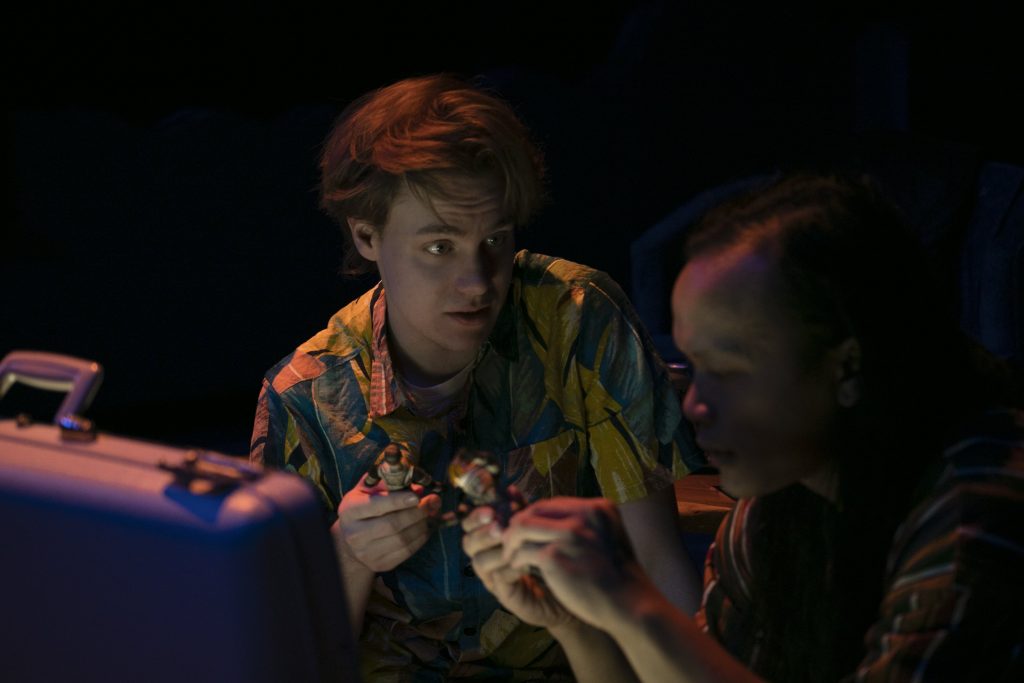 Andrew Start is no stranger to working in minimalism. Having previously directed “The Flick” for Spokane Civic Theatre, Start again brings his audience an intimate portrayal of humanity, this time marked with a tense and resolute realism.

“This Is Our Youth,” written by Kenneth Lonergan, is sodden with nostalgia, but with the kind that’s heavier on bitter than it is on sweet. Lonergan sets the story in the yuppie’s corner of 1980s Manhattan, which is found to be intrinsically riddled with disenchanted teenage delinquency. Living in the byproduct of abandoned ’60s progressive idealism, the “youth” in this play are smirking and cynical and in search of their next escapist high.

Dennis Ziegler (Denny Pham) opens the play emerging freshly showered in his stale apartment and plops onto his mattress for some routine channel surfing. A buzz comes from the ground floor, and he begrudgingly gets up to let in his friend, Warren Straub (Jacob Carruthers), who sheepishly enters adorned in luggage.

Catching up for them is a series of empty questions and answers, the answers all being, “Nothing.” Quickly Dennis reaches his main point – Warren can’t stay there. Warren was kicked out of his father’s house but not without first snatching $15,000 in cash. Dennis doesn’t want that kind of liability hanging out in his nook of parent-funded paradise. That is of course until that liability is reframed as a possibility – a possibility for a drugged-out good time that they could not only enjoy but also turn a profit.

Dennis, being the uncontested alpha, hatches a plan for Warren to finally get laid by the girl he’s been long pining, Jessica Goldman (Elizabeth Martin). She would come over with Dennis’ turbulent girlfriend, and the four of them would enjoy some choice cocaine, make some memories, then cut the rest and sell it to cover their expenses and allowing Warren to return home with all $15,000 in hand and feign innocence. It’s foolproof – unless of course you’re a soul-searching teen with self-destructive tendencies.

Pham plays the heavy with an unflinching authenticity. His mannerisms are lazy and dismissive, broadcasting clear visual signals of his resilient ego. That said, Pham knows when to lean into Dennis’ insecurities with an intuitive volatility that fleshes out Dennis as an emotionally unaware brute who is as defensive as he is charming.

Dennis is a character that could have easily been read as a one-dimensional, loudmouthed bad influence, but Pham avoids that by transcending a strictly intellectual performance and incorporating an emotionally internalized approach, bringing Dennis a richness and surprising empathy.

Carruthers also displays a masterful physical performance as Warren, but with a nuanced and consistent slouched posture in juxtaposition to Pham’s sweeping and assertive motions. He embeds Warren with a defeated psychology through hunched shoulders, avoidance of eye contact and waifish mannerisms.

This gentler character might make Warren out to be more empathetic than Dennis, but Carruthers brings a depth to Warren that enables the audience to understand him as more than just a victim of his circumstances. Carruthers delivers the dialogue with an innate entitlement and detachment, making Warren’s singular fascination for nostalgia and overall passive existence frustrating to witness.

Warren flaunts his blasé attitude as an inherent symptom of his upbringing, and when his decisions crumble in on him, he turns to his passivity as the cornerstone of his innocence. Carruthers highlights this superficial aspect of Warren’s character by evoking a timid and inculpable attitude to underlie his wannabe disaffected persona, pulling from a sense of earnestness that is pure and cowardly.

Martin plays Jessica with brilliant dimension. Her performance feels casual and lived-in due to the instinctual confidence she weaves into Jessica’s fortitude. Jessica serves as the philosophical counter to Warren. She is thrilled by his antique toy and album collection, yet does not get trapped in the crippling nostalgia he does.

Jessica sees the existentialism that plagues their world, but she takes it in stride, living more in the reality of the moment than the pseudo-intellectual Warren. However, that isn’t to say she’s not as confused as the rest of them. That’s where Martin’s performance shines. There’s a vulnerability Martin brings to Jessica that reminds us of her youth and emotional need for a life that is clearer and more pragmatic than what Warren can offer her.

This exploration of realism could not be complete with its minimal and claustrophobic set. Instead of an open set with furniture and décor to fill in the audience’s imagination, set designer Sam Holland chose to add low walls around the set that blend into clear glass allowing for visibility as well as a voyeuristic fishbowl effect that emphasizes the trappings of its characters.

The specialty props by Patrick Treadway and Angelina Jobe Cuba are impressive due to the complexity of creating and cueing live sounds from items in the room such as the TV set and record player. Small details seemed out of the time, such as the use of Instax photos instead of actual Polaroids, but overall the set, and costuming from Madison Taylor Hendricks, sealed the 1980s setting.

This performance of “This Is Our Youth” nails all its energetic and emotional ebbs with expertly directed naturalism allowing each actor to paint a human portrait. Each performance is brave and perceptive, a telling sign of a thoughtful director and committed actors working together to honor the themes of a strikingly still-relevant work of theater.

Article by Rachel Baker of the Spokesman-Review