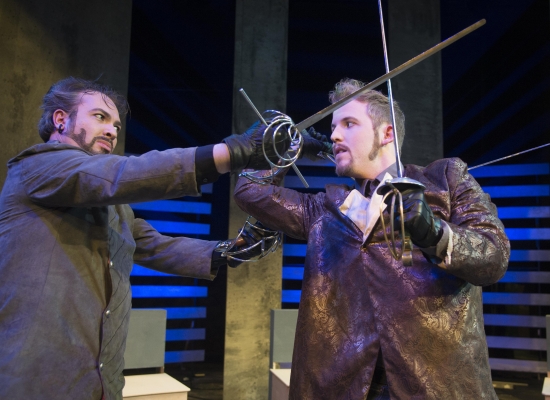 "Director Keith Dixon’s version of “Liaisons” avoids confining its story to a specific era: The characters mention that the ’90s are approaching, but they could as easily be referring to the 1790s as the 1990s. That makes the production visually distinctive…"

…This show is carried along by a trio of strong performances – [Ben] Dyck as the smarmy Valmont, who has the potential for empathy, [Nichole] Dumoulin as the vulnerable woman swept along in a game of betrayal and [Josephine] Keefe as the icy femme fatale who licks her lips as man after helpless man becomes ensnared in her web. Hampton’s script doesn’t give the actors much of a break – it’s wall-to-wall dialogue, often flowery in its language – which makes the work all the more impressive."

Review by Nathan Weinbender, The Spokesman-Review
Read the rest of the review online.

Photo by Colin Mulvany, The Spokesman-Review