REVIEW: In ‘Constellations,’ a path of fractured moments that make up a relationship 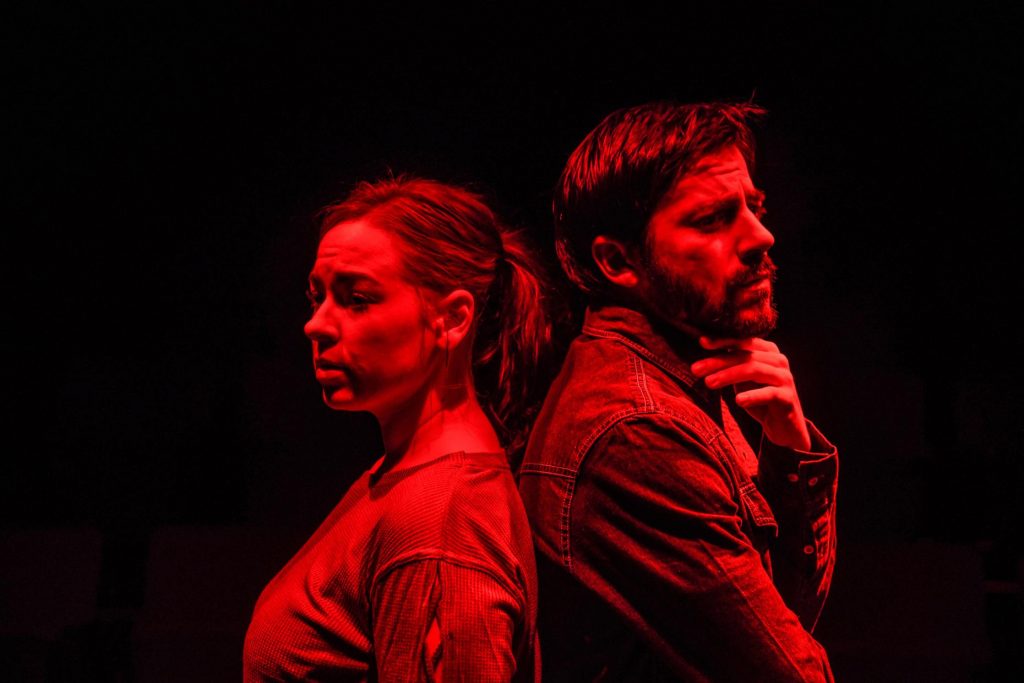 Is life one big “Choose Your Own Adventure” game or are all the twists and turns we experience predetermined?

Nick Payne’s “Constellations” doesn’t answer the question, but it does offer evidence to back both suggestions.

In “Constellations,” multiple universes allow quantum physicist Marianne (Chelsea DuVall) and beekeeper Roland (Max Elinsky) a chance to relive pivotal moments in their relationship over and over again, each redo slightly different than the last.

We encounter Marianne and Roland as they meet for the first time at a barbeque. Marianne approaches Roland and starts in on why it’s impossible to lick your elbow, a monologue Roland quickly brings to an end with “I’m in a relationship.”

A sound effect plays, and the scene starts over again. Only this time, Roland says he’s just come out of a serious relationship.

The sound effect chimes once more, and we see the same scene again, only this time Roland mentions his ex-girlfriend and the two have a nice conversation.

The next scene jumps ahead to much later in their relationship, with Marianne and Roland arguing about whether Marianne, who is having trouble speaking, will return to work.

“Constellations” continues in this fashion for the rest of the show. We see Marianne and Roland, in no particular order, through their first evening together, infidelity, marriage and more, each scene repeated at least once with a slightly different outcome than before.

Director Pamela Kingsley’s choice to use sound effects and flashing lights to indicate each redo was helpful, as they mentally prepared the audience to look for the differences.

DuVall and Elinsky, both making their Spokane Civic Theatre debut, deserve heaping amounts of praise for their ability to so effortlessly reset their characters time and time again, making subtle changes each time, as well as for their ability to jump from emotion to emotion at the drop of a hat.

The two, both playing characters a little nerdy and awkward, have great chemistry no matter the scene or its place in their relationship.

A conversation held entirely in sign language (aided by sign language instructor Angela O’Bleness, in her Civic debut) was especially sweet to watch.

Scenic and lighting designer Matt Egan’s sparse set – a honeycomb-painted floor, interspersed with black mirrors, plus three plexiglass cubes – lent themselves especially well to the ever-changing nature of the story, giving DuVall and Elinsky an almost blank canvas on which to reset again and again.

The play is on the shorter end (70 minutes, no intermission) but nevertheless that’s plenty of time to really make you think about how much, if any, control we have over ourselves and the life we lead.

It makes you think about what would have happened had you turned right instead of left or said yes instead of no. Maybe there’s another universe where the alternate scenario is playing out.