REVIEW: Civic’s time warp to ROCKY HORROR is worth the trip 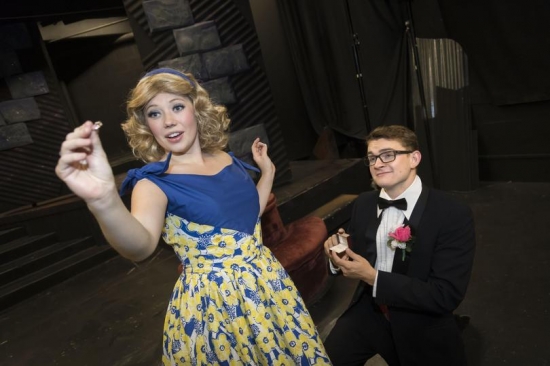 Few moviegoing experiences are as joyous as seeing the 1975 cult musical “The Rocky Horror Picture Show” with a boisterous late-night crowd. People dress up as the film’s characters, dance in front of the screen, shout rejoinders to the dialogue (many of which can’t be reprinted here) and throw props – rice, toast, confetti, toilet paper – at designated moments. The movie itself, which still holds up, is secondary to the interactivity it inspires…

We’re also told that, like a typical midnight screening of the film, we’re allowed to talk back to the show, which I can imagine might encourage an unfunny armchair comedian or two. But the opening night audience turned out to be mostly respectful of the cast, and it even managed to get in a few good zingers that aren’t in the “Rocky Horror” lexicon: After Janet complains about the rain, someone deadpanned, “It’s Washington.”

The production also successfully utilizes some film effects in the first act, with clips from ’50s B-movies beautifully complementing the lyrics of opening number “Science Fiction/Double Feature.” The decision to then present the song “Dammit Janet” as a prefilmed segment isn’t as effective: It’s no doubt meant to further distinguish Brad and Janet’s bland existence from the weird world of Frank and company, but I’d have rather seen the song performed live.

In terms of its music, “Rocky Horror” has few, if any, duds in its score, which is expertly performed by music director Henry McNulty and his small band. “Double Feature” is a lovely tribute to genre cinema, “The Time Warp” and “Sweet Transvestite” are unassailable classics, and “Hot Patootie” and “Eddie’s Teddy” are rip-roaring rockers.

The Civic’s cast is clearly enamored of O’Brien’s material, though they never seem to be aping the beats of their well-known cinematic counterparts. Ben Dyck is a lot of fun as Frank N. Furter’s flamboyant whipping boy Riff Raff, as is Dave Rideout as the bemused, pipe-smoking narrator. As the 7-hour-old Rocky, Hansen balances wide-eyed naivete and self-aware mugging, and Hunt and Fiedler, both reliable local performers, are perfectly cast as Brad and Janet.

And then there’s Frank N. Furter, certainly one of the wildest characters to ever stiletto-step onto a stage. A Tim Curry-shaped shadow will always loom over the role, but Edmonds, who was so funny in Civic’s “Evil Dead” musical last year, rips into his performance with brio. One of the show’s best moments is his rendition of the ballad “I’m Going Home,” which is an almost disarmingly poignant coda for a story that’s otherwise lightweight and postmodern.