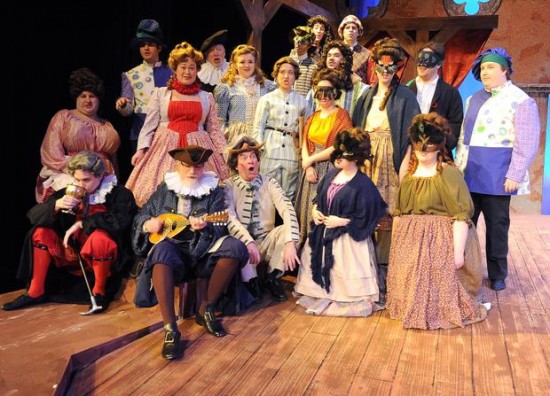 "Premiering this weekend at the Spokane Civic Theatre, “The Servant of Two Masters” maintains a screwball breathlessness for its entire duration. It’s got the kind of complex, whirligig plot that can easily come crashing down if the energy level flags for even a moment, but the Civic cast pulls this one off. You get the sense that the actors are having an absolute blast clowning their way through this material, and the play ends up being as much fun to watch as it no doubt was to perform.

The Civic’s production, fleetly directed by Patrick Treadway, is presented (quite brilliantly) as a play within a play. The set is designed to look like an old-fashioned raked stage, so we can see the performers as they wait in the wings, drinking and smoking and waiting for their cues to come back out. The actors also address the audience directly: In a form of 18th-century product placement, we’re often reminded of the all-purpose snake oil tonic that’s sponsoring the show, and they occasionally stop the action to catch us up on what’s happening in Goldini’s absurdly complicated plot.

It’s that self-aware winking that keeps this version of “Servant” fresh and limber. Comedy this chaotic has to appear effortless, but this fictional theater troupe is just as flustered and covered in flop sweat as the bumbling characters they’re portraying. Before the show has even begun, one of the actresses has run off (only to be replaced by the male stage manager in a dress and wig), and at a pivotal point during the show, someone forgets their lines and has to be reminded (through charades) by a mute stagehand.

…Treadway’s cast [does] most of the comedic heavy lifting here: As clever and gleefully ribald as Hatcher’s revamped script is, it’s the sheer stamina of the actors that keeps the show moving at an entertaining, breakneck pace. There’s not a bad or wasted performance here – even the ensemble sitting side-stage gets laughs through offhand lines and wacky sound effects – and every actor has a surprisingly tight grasp on the comic quirks of the characters. “The Servant of Two Masters” isn’t concerned with anything other than delivering laughs, but it does so with the regularity and proficiency of a well-oiled machine.