REVIEW: Civic’s production of ‘The Flick’ highlights the importance of listening to the pauses 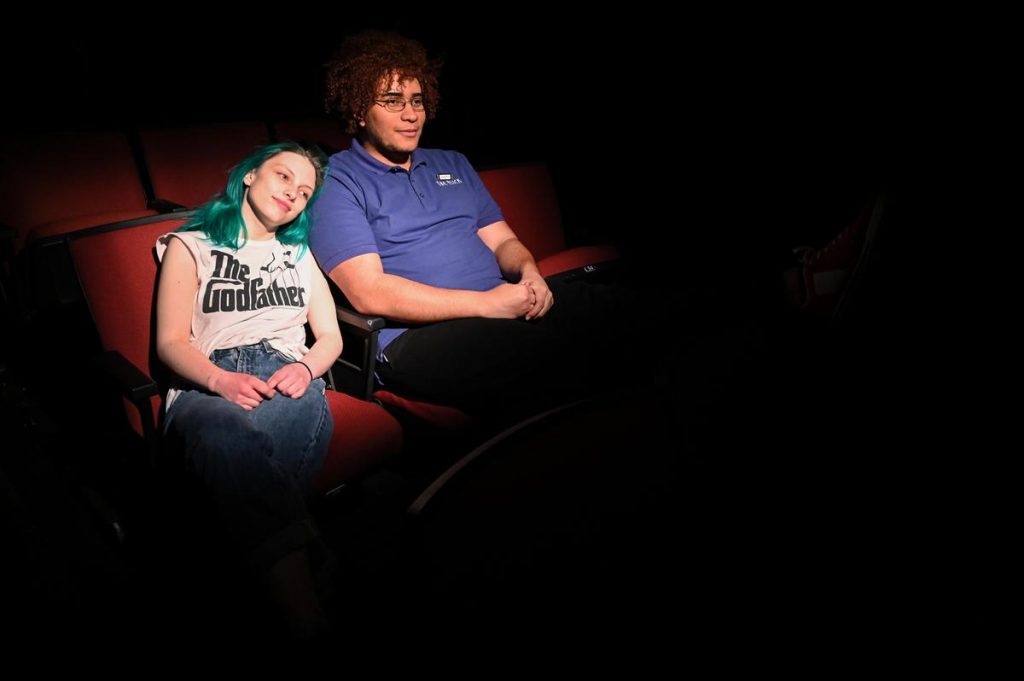 For the most part, to see live theater is, by nature, to be a fly on the wall.

Save for the rare times when actors address the crowd, members of the audience are observers watching a story unfold.

But that fly-on-the-wall feeling is amplified during Spokane Civic Theatre’s production of Annie Baker’s “The Flick.”

Throughout the play, the three leads chat while sweeping up popcorn and running the film projector.

But that’s the beautiful thing about this show. In between film screenings, we become more and more acquainted with each character as they discuss a variety of topics, including mental health, race and sexuality.

We also witness some pretty intimate moments, like a phone call between Avery and, presumably, a therapist, and defining interactions between Rose and each of her coworkers.

“The Flick,” which is directed by Andrew Start and also features Johnny Monday as Skylar, in his Civic debut, won the Pulitzer Prize for Drama in 2014.

Gilman, Hughes and Peterson did a fantastic job showing the evolution of the relationship among the three characters, from cordial to more intimate and, at times, resentful.

Gilman and Hughes were perfectly awkward around one another in the opening scene in which Sam teaches Avery, a new employee, how to clean the theater.

As time goes on though, the audience can see they’ve become friends, with Sam shouting out pairs of actors (“Jack Nicholson and Dakota Fanning,” “Michael J. Fox and Britney Spears”) in an attempt to stump cinephile Avery in rounds of six degrees of separation.

The no-nonsense Rose, on the other hand, is far from timid and immediately compliments Avery on his shoes before inadvertently starting the first of the trio’s many arguments when she clues him in to what she and Sam call “dinner money.”

Eventually, the characters, in pairs and as a trio, share more with one another, and, by default, the audience.

The audience is able to read between the lines and piece together background information about each character that isn’t shared as part of the script.

Peterson, who stepped in near the end of rehearsals after another actor fell ill, did a wonderful job of slowly showing some of the cracks in Rose’s tough exterior.

Hughes, in his Civic debut, was so sweet as Avery, not wanting to rock the boat but also not afraid to stand up for himself.

Gilman’s Sam added a lot of comedic relief to the show, though he was also really strong in moments that Sam was weak, especially a big scene with Rose in the second act.

Monday, as Skylar, nearly broke the fourth wall near the end of the show when he reached out to touch the “screen,” or, because of how Start arranged the show, the audience.

The only time the characters actually did break the fourth wall came as the result of an unscripted moment. Gilman didn’t catch a book Peterson tossed his way in one scene, and it ended up at the feet of an audience member.

The audience member tossed the book to Gilman and, to the actors’ credit, they resumed the scene as if nothing had happened.

Scenic and lighting designer David Baker created a wonderfully realistic theater for the actors, one with rows of red seats, curtains against the back wall and a projection booth, which the audience is able to see into.

A play like “The Flick” requires a bit of patience from the audience, because, as previously mentioned, it features nothing but sweeping and conversation between coworkers.

But that patience pays off in the end.

Many of the trio’s conversations seem mundane in the moment, but as time goes on, you really start to see a deeper meaning and a more complete picture begins to take shape. Altogether, “The Flick” highlights the importance of listening to the pauses as much as you listen to the words someone says.