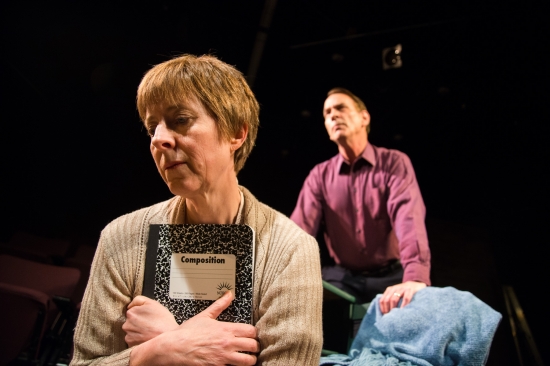 Steven Dietz’s “Fiction” is a drama about the gaps between our memories and how we fill them in as a means of making our pasts feel more complete. Think back on some of the defining moments of your life and there are bound to be tiny details you no longer recall: As one of the characters says, “Of a man and his memory, memory is the better writer…”

The most effective segments of “Fiction,” which has been intelligently directed by Susan Hardie, involve this trio of strong-willed yet vulnerable characters unpacking the moral implications of their individual relationships. Nothing is explicitly stated – they all seem to be tiptoeing around what they really want to say – but every suggestion has a cruel sting to it, and every line of dialogue comes armed with a hidden insinuation. Trotter, Heppler and Shimek Davis deliver strong, potent performances, all the more effective because they’re never totally direct. Sure, the emotions they display are honest, but their true motivations aren’t always clear.

…It also never becomes melodramatic or hysterical, despite grappling with themes of death and infidelity. This is a show that’s both modest in scope and in tone, and it turns out to be an expertly modulated piece of fiction.