PREVIEW: Where The Cards May Fall 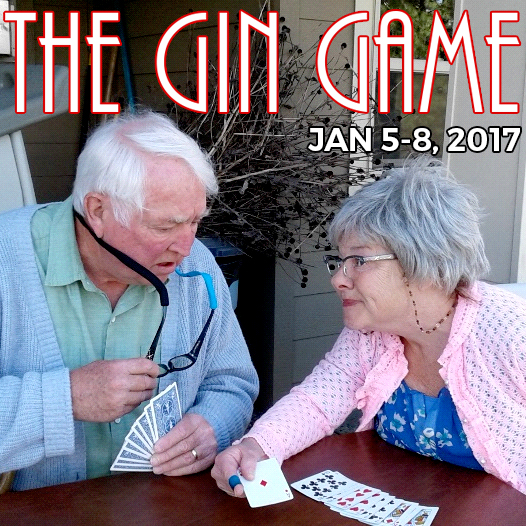 Card games, much like chess, are often used as a kind of dramatic shorthand, a proxy battle between two adversaries with rules that we, the audience, already understand. When James Bond calmly fans out his winning hand to the obvious dismay of the evil mastermind, it's not some incidental event during a more elaborate and high-stakes mission for MI6. It's a symbolic victory that anticipates their final confrontation, telegraphing to us that 007 is suaver and savvier than the villain he's facing.

Donald L. Coburn's 1976 play The Gin Game is crafted around this idea of the card game as proxy battle. It doesn't involve spies or gangsters, but rather two ordinary and lonely senior citizens, Weller Martin and Fonsia Dorsey, who've struck up a friendship of sorts in their nursing home. Over time, their cordial games of gin rummy become a means of personal domination and humiliation.

"It's a metaphor for playing the game of life — who wins, who loses. But it certainly uses that [card] game to tell us about these people, their relationships with each other, and the way they've lived their lives," says Jean Hardie, the director of a new staging of Coburn's Pulitzer Prize-winning play at the Spokane Civic Theatre. It stars Kathie Doyle-Lipe as Fonsia and Ed Bryan as Weller.

Doyle-Lipe describes her character as a "very sweet, heartbroken lady," albeit only "on the surface."

"As she grows throughout this play, you realize that maybe some of these things that break your heart about her weren't exactly put upon her," she says. "She's pretty wicked at times. She's made things difficult for her children, and she makes things difficult for Ed's character."

Fonsia's opposite number has hidden complexities of his own. "Weller has high esteem for himself," says Bryan. "He thinks he's very accomplished in most everything, especially a gin game. But this gin game reflects what happened to him through his life. He built a business and lost it, got sick. Basically, he's pretty down to the bottom of the line, but he doesn't want to face that. By getting Kathie's character to play gin with him, he can show her how good he is and manipulate her."

Although Hardie has helped to guide the two actors in how they approach their characters and balance the play's humor with its darker moments, she's quick to note that "[t]his whole thing was Ed's baby."