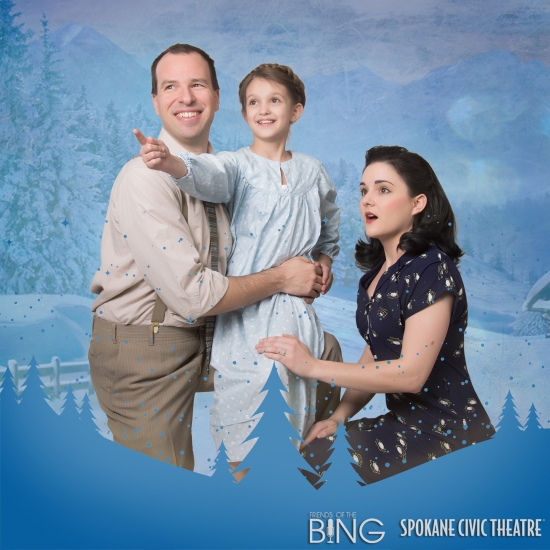 It was common practice in the 1940s and ’50s to adapt popular movies into hourlong radio dramas. Frank Capra’s 1946 classic “It’s a Wonderful Life” was one of those films, with Jimmy Stewart and Donna Reed reprising their roles in several radio programs following its original release.

That broadcast of “It’s a Wonderful Life” has since been transferred to the stage by playwright Joe Landry, and you can see it this weekend at the Bing courtesy of Spokane Civic Theatre.

The production is designed to make you feel like you’re in a ’40s recording studio. The actors stand in front of old-timey microphones and read directly from their scripts. Some members of the cast play multiple roles, there are live sound effects to complement the action, and recreations of commercials from the era break up the action.

“I always encourage audience members to, at some point, close their eyes and let their imaginations fill in the gaps. It’s a lost art,” said director Lenny Bart. “Generations before us, when radio was such a strong medium, did that. They envisioned these atmospheres. You’d create these beautiful, warm homes in your mind, and it can really do so much more than a scene designer could possibly do.”

Civic staged the “Wonderful Life” radio play last year, and the Christmas Eve performance will again be simulcast live on 91.1 FM. Although this is Bart’s first local directorial credit since he was named the Civic’s artistic director, he’s previously directed radio play-style adaptations of “Dracula,” “Miracle on 34th Street” and “The Shop Around the Corner.”

“It’s a fun art form to work in,” Bart said. “It’s a short rehearsal period. … Particularly in this holiday season, it’s an easy commitment from the actors, to get them to do something heartwarming without completely taking them away from their families…"