PREVIEW: Mary Poppins at the Spokane Civic Theatre brings magic and music to the stage 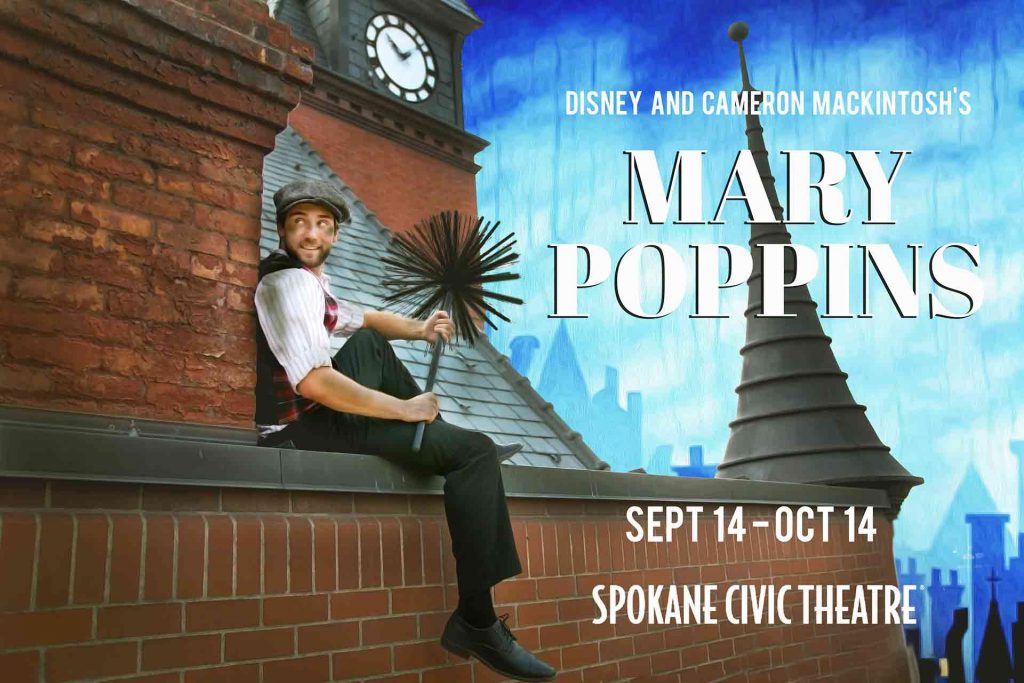 “It’s literally exhilarating,” Schaefer recalls. “It makes you believe for a moment what is unreal is real, just for a moment.”

Schaefer was a young child when he saw an actor fly for the first time in Nickerson’s production.

“There’s always that kind of gasp and excitement. I remember seeing that as a kid, backstage or even when I directed it, there’s always that first moment where Peter flies through the nursery window that was amazing,” Nickerson says.

The two hope to bring that childlike wonder back to the Civic with it’s 72nd season opener, Mary Poppins, in which several characters will take flight.

The beloved story of the magical nanny that brings together a distant family is based on a series of children’s books by P.L. Travers. It was first adapted into the classic 1964 film starring Julie Andrews and Dick Van Dyke and eventually written for the stage and produced in 2004. The musical is a combination of the books and movie, drawing elements from each. The Civic’s production is directed by Nickerson.

“I didn’t have to, really, feel like I had to copy the movie directly, but then again, it’s such an iconic show, there are certain things people are going to expect,” Nickerson says. “So we’re keeping it fairly traditional in a lot of ways. But you know, bringing our own style to it.”

Nickerson has been a prominent name in the Spokane theater scene for many years, but still, Mary Poppins has found ways to stump him. He chuckles when he says he doesn’t “do a lot of Disney.” It’s also one of the most technically complicated shows he’s ever directed.

“It’s really big, it’s a very technical show. So that has been a surprise, just tackling all of that. It’s a lot of production numbers, huge sets, big lighting, the flying, it’s just a lot of stuff,” he says.

Though the Civic has flown actors before with their own system, Schaefer felt that bringing in a company dedicated to flying special effects would be necessary to achieve the magical scenes they hope to create. For that reason, they reached out to Flying by Foy, a Nevada-based company specializing in professional theatrical flight.

James Hansen, the contract administrator for Flying by Foy, says the company does “a little bit of everything,” and considering their professional credits, even that is a bit of an understatement. They’ve set up their flying systems in everything from Broadway to rinky-dink high school theaters, cruise ships, churches and many more. Katy Perry and Lady Gaga were flown by Foy in their Super Bowl halftime performances in 2015 and 2017. If you’ve seen a celebrity fly on live television, there’s a good chance this company was behind it.

When flying an actor in a theater, Hansen says the set-up is, in basic terms, very similar between a large Broadway space or in a smaller community theater, like the Civic. A flying director and team will travel to the theater and attach their advanced track systems to fly systems already in place, or if that isn’t available, overhead structures like high beams. Heavy duty wires descend from there, used to lift the actors.

Schaefer is thrilled to have the company involved with the Civic, first and foremost because these special effects will be the most advanced flying effects to be brought to the theater.

“I think more than anything, it’s a sign that we’re working hard,” Schaefer says.

While tackling the involved technical elements was daunting for Nickerson, putting his own twists on the show came more naturally. His search for a talented cast didn’t involve looking for actors who would emulate Julie Andrews or Dick Van Dyke, rather those who could truly inhabit Mary and Bert.

And as for the actors who get to experience the magic firsthand?

Preview by Brooke Carlson of the Inlander