PREVIEW: Eccentricity the norm in Spokane Civic Theatre’s ‘You Can’t Take It With You’ 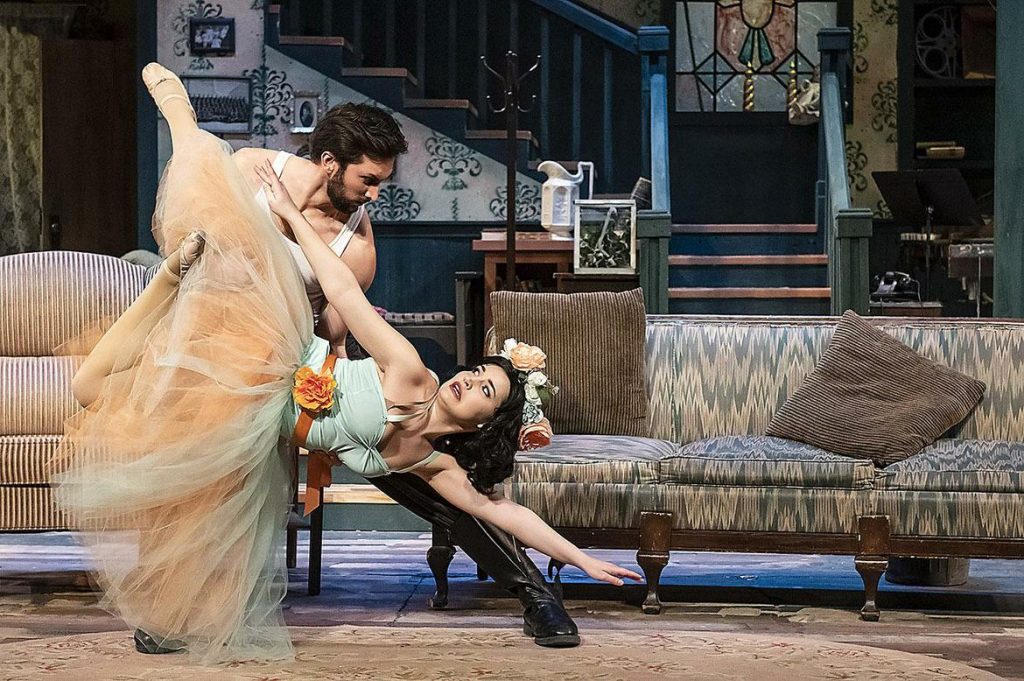 You may think your family is eccentric, but chances are they have nothing on the Sycamore-Vanderhof-Carmichael crew.

His daughter Penelope Sycamore (Phedre Burney-Peters) writes melodramas and is married to Paul Sycamore (Joshua Baig), who constructs fireworks in the basement of the family home with the help of Mr. DePinna (David Stanley), who used to deliver ice to the family.

Then there’s Essie Sycamore Carmichael (Sara Plumb), daughter of Penelope and Paul. She’s a candymaker who dreams of becoming a ballerina, which wouldn’t be so crazy if she wasn’t a terrible dancer.

Essie is married to Ed Carmichael (Dennis Burgess), an amateur printer who also plays the xylophone.

The only seemingly “normal” member of the family is Paul and Penny’s other daughter Alice (Jessii Arp), who works in an office and is dating a coworker named Tony Kirby (Dallan Starks).

It’s only after inviting Tony’s straightlaced parents (Doug Dawson and Lynn Noel) over for dinner that Alice really begins to wonder if her wacky family will turn Tony and his parents off.

Throw in a cook (Athena Lauzan), a handyman (Kaylan Martin), a Russian dance instructor (Dane Larson), an actress with a drinking problem (Deborah Brooks), an IRS employee (Michael Nelson), government agents (Alex Barclay, Bob Francis and Ken Gordon) and a grand duchess of Russia (Audrey Overstreet) and it’s a wonder the house doesn’t collapse because of all the madness.

Spokane Civic Theatre’s production of “You Can’t Take It With You,” written by George S. Kaufman and Moss Hart and directed by David Baker, opens Friday and runs through Feb. 17.

The play premiered on Broadway in 1936 and won the Pulitzer Prize for Drama the next year.

In 1938, the play was adapted into a film starring Jean Arthur, James Stewart, Lionel Barrymore and Edward Arnold.

The film went on to win best picture and best director (Frank Capra) at the 1939 Academy Awards.

Baker is also handling set design and lighting duties on this production.

As a director, he was interested in the chance to work with actors playing characters that, no matter how many lines they have, are all well-drawn and funny in their own way.

This show is a treat for him as a designer as well.

“From the designer point of view, the period piece, the year, the vintage of things and the wackiness of all the characters that have their own hobbies and coming up with all those props and bits that speak so much to the personality of the characters, that’s really fun,” he said.

Because “You Can’t Take It With You” is a single-location play, taking place entirely in the living room of the Sycamore family home, Baker had a lot to consider when it came to the set.

On one hand, he usually likes to hold something back, a surprise that the audience doesn’t see as soon as they enter the theater.

But because there is only one set piece, he couldn’t do that this time around.

Instead, he had to create a set that would grab audience members as soon as they saw it and keep them interested throughout the show.

“On the other hand, you can embellish and embroider the set with all kinds of personality,” Baker said. “In a show like this, the eccentric nature of the family that lives there can really come out.”

Baker likens the set to a game of I Spy in which audience members might see props they didn’t notice during the first act later in the show.

After dressing the set with bric-a-brac galore, Baker told the cast and crew, who he invited over for Christmas, that his home looked a little like the Sycamore home.

In fact, a friend of one of Baker’s children said they liked coming over because the home reminded them of the Weasley home in the “Harry Potter” series.

“It is a compliment but I also thought that’s the modern-day equivalent for people today,” Baker said. “The Weasleys are the new Sycamores. If you think about it, there’s a lot of parallels there and I think every generation has that go-to crazy family that maybe everyone wants to visit but they’re not sure they want to marry into it.”

Set in 1936, “You Can’t Take It With You” has become a sort of sign of the times. Some of the crazy things the family did then might not seem so wacky now, Baker said.

It’s the straitlaced Kirby family, in actuality, that might seem odd to audiences, but Baker and the cast and crew are making sure audiences understand just how eccentric the Sycamores really are.

“Getting into the period and making them realize even doing something crazy like wearing a hat in doors, it’s a different sensibility that you need to keep track of and try to communicate,” Baker said. “I think we do. I think people definitely can see their way through that.”