PREVIEW: Civic’s ‘The Book of Will’ celebrates creation of Shakespeare’s first folio 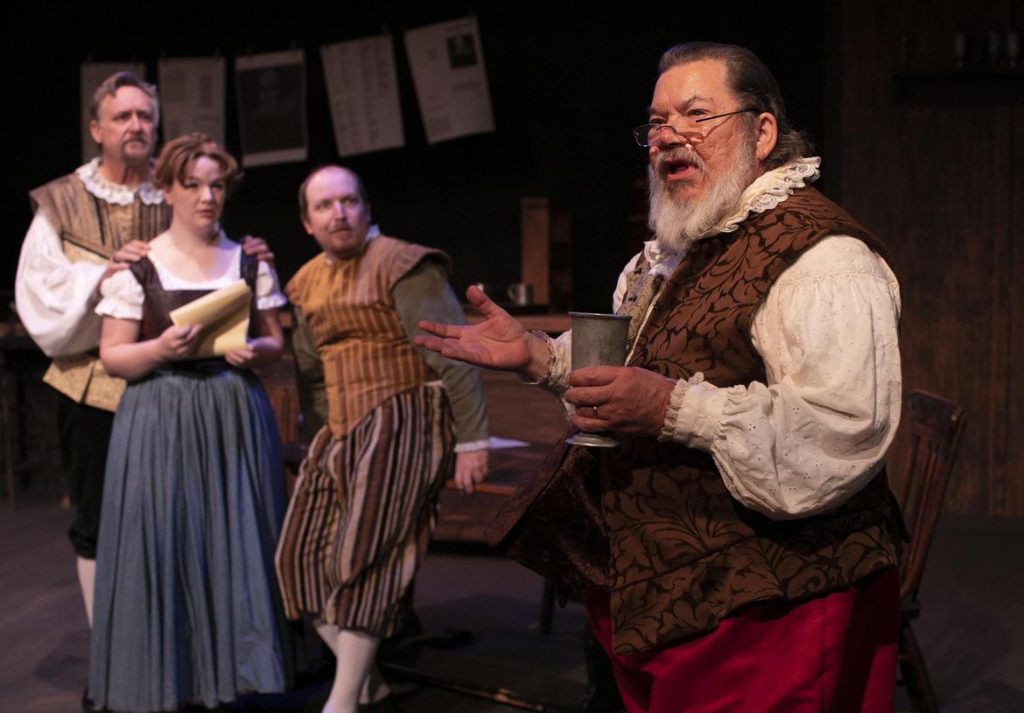 They say “imitation is the sincerest form of flattery.” But how should you feel when someone steals your material and presents it as their own? That was a common occurrence when William Shakespeare was making a name for himself as a playwright, according to Susan Hardie.

Fellow playwrights, Hardie said, would attend productions of Shakespeare’s plays, scribble down the dialogue as best they could and either publish or produce their own version of the play.

In fact, Lauren Gunderson’s “The Book of Will,” which Hardie is directing at Spokane Civic Theatre, opens with “a really bizarre rendition” of the “To Be or Not to Be” speech from “Hamlet.” “The Book of Will” opens Friday and runs through Oct. 20 in Civic’s Firth J. Chew Studio Theatre.

“The Book of Will” begins three years after Shakespeare’s death. Hoping to stop others from claiming his work as their own, members of Shakespeare’s acting troupe, the King’s Men, work to collect Shakespeare’s plays as they were written.

That mission is made even more difficult by the fact that Shakespeare was so protective of his scripts, he never had one complete script. Instead, he handed out individual parts to each actor.

“The foresight that these dear, dear friends and associates of Shakespeare, Henry Condell and John Heminges, the foresight they had to gather up the true scripts as they could and publish them made it possible for us to know ‘Hamlet’ and ‘Romeo and Juliet,’ ” Hardie said.

“At least half of the plays would have never seen the light of day had these two gentlemen and their compatriots not taken it upon themselves at great risk, I might add.”

Hardie was interested in directing “The Book of Will” because, while reading the script, she was moved by the story Gunderson told. “The script itself just sang to me,” Hardie said. “It’s got everything you want in a play.

“It’s got beautiful language, it’s got wonderful characters who in this case are really true-to-life characters, it’s got heart, it’s got villains, it’s got lovers, it’s got a certain theatricality that really speaks to me …

“It made me cry, it made me laugh. When a script does that, that’s when I know it’s something I want to be part of for many months.”

Hardie also researched Gunderson and her thoughts on the play, which she said gave her great insight, as well.

Hardie and the cast have enjoyed finding that the empowered women in the script were as empowered in real life and that Heminges and Condell were ahead of the times in terms of their relationships with the women in their lives.

Condell, for example, made his wife, Elizabeth, executor of his will, something Hardie said was unheard of at the time. Hardie and the cast also talked about the theme of family, both those in the play, like the Condells and Heminges, and the theatrical family.

“Those of us who do theater understand how deep those ties go and that whole notion of legacy, which is the notion that ‘We do this, we put everything on the line to build this book for not only us but for Will Shakespeare, our dear friend, for posterity,’ ” she said. “The family that we’ve created at Civic Theatre is even more powerful since we’ve explored that whole theme in the play.”

Hardie thinks those themes, plus the inclusion of villains, lovers, death, humor and pathos, “all the wonderful elements that a great Shakespearean play has,” will draw audiences in, as will the more modern language.

“We’re not speaking in iambic pentameter,” she said. “It’s an extremely accessible piece, and I think the audiences are absolutely going to fall in love with these characters.”