PREVIEW: Civic jumps to the left for ROCKY HORROR 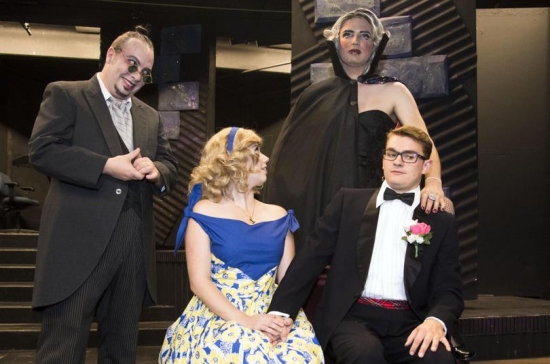 Few pieces of theater better represent the culture’s shifting social mores than “The Rocky Horror Show.” What was seen as a risque cult curiosity upon its premiere in 1973 is now a beloved mainstream classic, thanks in large part to the 1975 film adaptation that still plays to sold-out midnight audiences around the country.

The film’s depiction of bold sexuality and gender non-conformity might not seem so controversial anymore – it was even recently remade for network television – but Spokane Civic Theatre’s upcoming production of Richard O’Brien’s original sci-fi musical is likely going to raise a few eyebrows.

“While the movie is great and iconic and lovely, I think it’s a little tame by today’s standards,” said the show’s director, Lance Babbitt. “We’re pushing the envelope as far as we can probably push it. You’ll still get the same wonderfully zany, funny story, but it’s as if it was being done on HBO. … I’m trying to take the sugar coating off the show a little bit…”

“We’re going with a kind of glam, punk, techno quality to the show,” Babbitt said, noting that this is likely the first time “Rocky Horror” has been staged by a Spokane theater. “I never wanted to do a slavish reproduction of the movie. I thought that would fall into too many traps – ‘He doesn’t sound like Tim Curry,’ or, ‘He doesn’t sound like Richard O’Brien.’ We pay homage to it a few times, but there are no literal references to the movie at all.”

And if you’re curious about audience participation, which is a cornerstone of the “Rocky Horror Picture Show” experience, Civic will be selling packages containing the necessary props to throw at the stage.