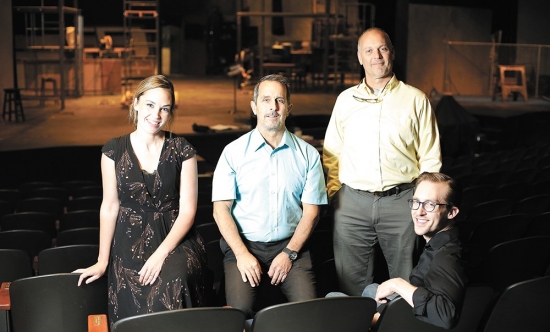 "The Modern closing was a hit for all of us," says Emily Jones, who performed at both Modern theaters, first in Lucky Me and shortly thereafter in God of Carnage, two years ago. "Every time a theater can't keep producing, it takes a toll on the local community."

Jones is now the marketing coordinator at Spokane Civic Theatre, where she joins folks like executive director Mike Shannon, music director Henry McNulty and artistic director Lenny Bart on the community theater's paid staff. All four are relatively recent hires to replace outgoing members, the most salient being Keith Dixon, who abruptly resigned from the Civic in the middle of last season after having been hired to replace Yvonne A.K. Johnson in 2014.

Johnson, for her part, appears to have kept a lower profile since returning to the area from the East Coast and launching Spokane Valley Summer Theatre last year. While at the Civic, however, she was widely regarded as a polarizing figure in the local theater community. Her tenure there wasn't without its successes, yet it also had a destabilizing effect that contributed to the outward flow of actors and support to other venues around town.

These days that entropy is starting to subside and ruptures are being mended, not least because the Civic staff are using their "fresh eyes and fresh passion to reach out to the Spokane community," says Jones. "The Modern closing has given us this opportunity and this drive to really make everyone feel welcome here. It's our 71st year of providing a place to practice the art that they love."

As proof of that welcome, she points to the Civic opening its doors during Hoopfest and the casting of "more brand-new volunteer actors than we ever have before," coupled with the return of actors like Daniel McKeever, once a regular cast member in Modern productions but now performing again at the theater — most recently in Kiss Me, Kate —where he got his start as a teenager…

By E.J. Iannelli of the Inalnder