Here’s our next playwright of this feature: 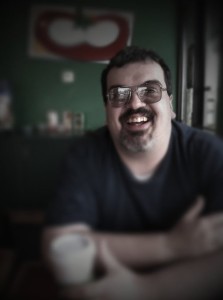 Lives in: Spokane, Washington – Born and raised. Has been back since 2008 and still on a Spokane Renaissance, getting to experience the town he grew up in as an adult.

I graduated from Washington State University in 2003 with a degree in journalism.

I write plays, film scripts, novels and anything else I can get my hands on in my spare time – at least a half hour a day, ideally

What is The Girl Wore Red Licorice about?

A psychic runs up to Peter Hopewell and tells him when and where to meet the love of his life. And what she’ll be wearing …

Growing up, we didn’t have a lot of money to participate in every school sale that came along, but we made darn sure to be in line when long ropes of licorice – red licorice – were being sold. I can remember walking home from Whitman Elementary with armfuls of licorice with my mom and my brother.

The family joke is that Dad was lucky to get one or two ropes when he got home from work, it was so fresh and delicious, I guess that sort of elevated red licorice in my mind, to the point that I thought, if I ever came across a girl in the right situation, and red licorice was somehow involved, that might be a sign from the fates. Ergo …

I will be there, with family and friends, on both nights!

This play has its roots in Spokane and Whitman in more ways than one.

The director, Will Gilman, and I have been good friends since I was in the fifth grade and he was in the sixth. We reconnected again at Garry Middle School and at Rogers High School, where we teamed up on the school newspaper to make up “hilarious” horoscopes and stories and just generally had a good time.

Will is a talented actor, director, playwright, comedian and podcast host here in Spokane. I’ve been pestering him to collaborate since moving back, and this is our second opportunity (he previously directed a reader’s theater version of another short play of mine for another community theater production). Hopefully many more are in store …

The Girl Wore Red Licorice is one of six one-act plays showing at the sold out Playwrights’ Forum Festival this year – and one of five competition pieces. Each of the five pieces will be competing to win the Adjudicator’s Choice Award, and an Audience Choice Award.