The Countdown to Les Miserables Had Begun

For the first time a community theatre in Spokane has the opportunity to bring Les Misérables to the stage and we are so incredibly excited about this regional premier. Civic theatre was selected as one of eight community theatres in the nation to produce and present Les Misérables. This is one of the largest productions Spokane Civic Theatre has ever undertaken and we are bringing some of the most amazing regional talent to the stage. With less than a day until Les Mis opens, we thought we’d bring you some fun stats for the production. 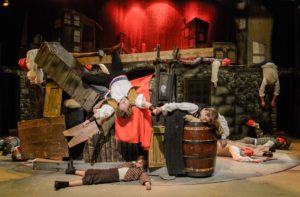 Les Mis is an Opera and Therefore a Story

According to Tia Wooley, stage manager for the production, “It’s an opera. There are, like,  three spoken lines and each of those lines has three words or less.” And here is Tia’s synopsis of the show. (PS it is kind of nice to know the back story before you get to the theatre, so pass it on.):

Man steals loaf of bread to feed his sister’s starving children, gets arrested, does 19 years (he keeps trying to escape, therefore racks up more time.). Once he gets out, he can’t find work, tries to steal from a man of God and gets caught. However, the man of God, gives him the silver he was trying to steal, and tells him to turn his life around. He does by hiding all evidence that he was a prisoner and hiding from the law. He becomes a wealthy business man and mayor of a town all the while, the guard from his prison days is tracking him. The prisoner/mayor rescues a woman who had worked for him and who he inadvertently fired. As she is dying, he promises to rescue her daughter from evil innkeepers. Later, the prison guard recognizes him, and tries to arrest him, but the prisoner/mayor escapes after the rescued woman dies and goes to rescue her daughter as he had promised. He does and they go into hiding. Years pass, then the daughter falls in love, there is a big battle (and we mean big) during which he saves the man his friend’s daughter fell in love with as well as the prison guard. Note: quite a few things happen after this point but to tell them would potentially ruin your evening of theatre. 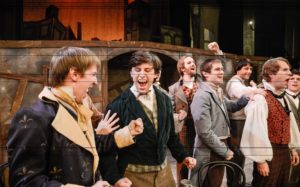 Come, See the Show and Be Miserable With Us

This is a huge production for any theatre. Civic has pulled in Doug Webster, who has the unique perspective of having actually had a conversation with one of the show’s writers. His vision is amazing and the actors are excited to see it unfold in front of your eyes! The Music Director is phenomenal. Eric Little is from Portland, and he is coaxing the nuances of the music of Les Misérables so it hits every chord in your heart. You will probably cry, so pack tissue! This show will appeal to the theatre and non-theatre people. It’s amazing. Simply amazing. You will feel this show throughout your entire body. I challenge you to watch it and not feel it.