Intrigue, romance, laughs — the Civic’s regional premiere of Murder on the Orient Express aims to have it all 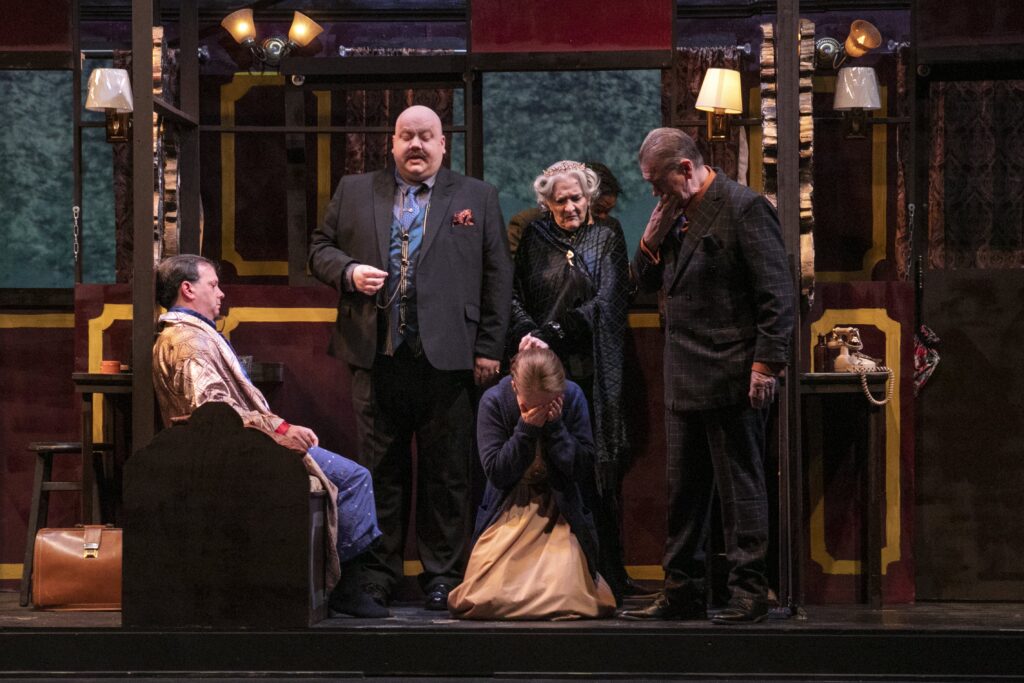 Agatha Christie’s Murder on the Orient Express has been adapted to TV, radio, film and even computer games since it was first published in 1934, but it took more than 80 years for an official version to reach the stage. With the blessing of the author’s estate, American playwright Ken Ludwig, best known for farces like Lend Me a Tenor, was responsible for turning one of Christie’s most well-known works of detective fiction into a script for live theater in 2017.

Ludwig’s long-awaited adaptation of Orient Express gets its regional premiere this weekend on the Spokane Civic Theatre’s main stage. This production is directed by Heather McHenry-Kroetch, who admits she has a special fondness for Christie’s murder mysteries.

“I’ve been reading Agatha Christie since I was very young,” she says. “It’s a little bit cozy, a little bit glamorous, there’s a little intrigue. And by cozy, I mean that you know there’s going to be a solution, which is why we read mystery novels like this.”

Set largely on a single coach during the golden age of train travel, Orient Express features a cast of high-society characters with secret identities and potentially sinister motives. That naturally lends itself to the very qualities — coziness, glamor, intrigue — that McHenry-Kroetch wants this play to embody. Ludwig, however, added a further dimension to his script.

“There’s comedy throughout. There are jokes, and I mean three-beat jokes, which is interesting, because I do direct comedies often, and sometimes dark comedies, and this isn’t either of those. But there’s built-in humor. Which is great, because I like an audience to laugh.”

That’s led to what McHenry-Kroetch describes as a “tightrope” as she works to balance the classic Christie qualities with the more overt humor Ludwig’s introduced.

“I even have a dramaturge — a good friend of mine who loves Agatha Christie and is a quasi-expert on her — because I want it to be recognizable to the audience who have read Christie. I want that feeling for them, but I also want it to be accessible to people who don’t,” McHenry-Kroetch says. A dramaturge is, generally speaking, someone who’s responsible for interpreting scripts and providing the director and actors with valuable background information and context.

Ludwig’s tonal changes aside, one immutable constant is Hercule Poirot. As in dozens of Christie’s novels and short stories, the solution to the titular murder rests on this fastidious Belgian sleuth. His keen observations and logical mind are pivotal in untangling knotty motives or backing killers into a corner, leaving them with no option but to confess.

Amid a cast of 11 that includes Doug Jacobs as railway executive Monsieur Bouc, Samuel Schneider as shady Samuel Ratchett, Hannah Slusser as the captivating Countess Andrenyi and Wendy Carroll as the obnoxious divorcée Helen Hubbard, Bryce Clifton stars as Poirot. The role brings the actor back to the Civic’s main stage after his recent appearance in The Play That Goes Wrong.

Clifton is very aware that Poirot has become synonymous with on-screen portrayals by actors like Peter Ustinov and David Suchet.

“Coming into this, I had seen the Kenneth Branagh films and was actually a big fan of the David Suchet and BBC series. When the pandemic broke out, my father and I binged that entire series over the course of a month or two. It was kind of a nice bonding moment,” Clifton says.

Suchet, in his eyes, best “embodies the energy and the quirks and the mind of this iconic character.” Clifton looked to his example for the mannerisms and “physicality” that makes Poirot such a memorable, all-too-human figure — one that even Christie herself grew to dislike.

But he also wanted to make the part his own.

“You never want to be impersonating,” he says. “I would like to think I’m bringing a little bit more of a chummy Poirot. He’s looking to be friends with everyone in this show — not as cold and distancing or as hard and calculated.”

Clifton’s Poirot is to some extent left feeling “betrayed” by the outcome rather than simply stating it as a series of events that his little gray cells have just unraveled.

The setting of Orient Express isn’t exactly conducive to friendships, either. The tight space of the rail car has the guests almost on top of one another. At the same time, those confines are essential to the plot. They create important dynamics, such as Poirot’s interactions with off-putting characters like Ratchett and Hubbard.

“The scene where we investigate the body has been a wonderful challenge. It’s three of us — Bouc, myself and the countess — examining the body and all the clues that have been placed in this tiny compartment,” Clifton says. “And so we’re just dancing around each other the whole time, constantly slipping in and out while making sure that the audience can see us at all times.

“As an actor, you’re used to having the whole stage to work with. We’re doing everything on a postage stamp.”

“It’s a different kind of set than the audience is used to seeing on the main stage,” says McHenry-Kroetch. “Where the set is on the stage, watching the train, all of that gives it a more cinematic quality, which is in line with how this adaptation was written. That era of train travel is romantic, and when something terrible happens in a setting like that, already there’s interest. That’s what we’re trying to recapture.” ♦