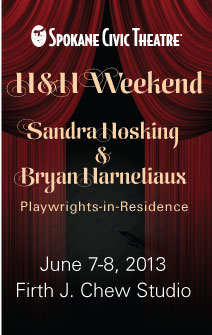 This is a non-ticketed event. Donations at the door appreciated.

When Aleah is bored at work, she makes up stories and games to amuse herself—at her co-workers’ expense. When rumors swirl that the office is downsizing, she fears for her job, and one disgruntled employee takes matters into her own hands. One harrowing moment sends Aleah on a journey of self-discovery and faith, changing her life forever.

Sandra Hosking is Co-Playwright-in-Residence at Spokane Civic Theatre. Her plays have been performed across the U.S. and internationally. She is former editor of InSight for Playwrights, for which she interviewed David Lindsay-Abaire, Beth Henley, Steven Dietz, and a host of other well-known and up-and-coming dramatists. A member of the Dramatists Guild of America, she is an M.F.A. candidate in playwriting at the University of Idaho and holds an M.F.A. in creative writing from Eastern Washington University.

Bobby and Lee are a long-married couple. Lee is a hard-driving women's basketball coach. Bobby was a basketball coach and, later, an insurance salesman. But now, Bobby is in failing health, even though he is only 51. As his physical condition declines further, Bobby finds himself confronted by choices: whether to fight for every breath in hope that things will improve, or make preparations for a graceful exit.
There are still things left unsaid and undone between Lee and Bobby. These things are suddenly brought into sharp focus, as time may be running out. If we are fortunate enough to live long enough, we may all have to contemplate the decisions being faced by Bobby and Lee, in the World Premiere play "Holding On~ Letting Go."

Bryan Harnetiaux has been a Playwright-in-Residence at Spokane Civic Theatre in Spokane, Washington, since 1982. Thirteen of his plays have been published, and his short play The Lemonade Stand is also anthologized in More One Act Plays for Acting Students (Meriwether Publishing Ltd., 2003). These works include commissioned stage adaptations of Ernest Hemingway’s The Snows of Kilimanjaro and The Killers, and Kurt Vonnegut, Jr.’s Long Walk to Forever, all published by The Dramatic Publishing Company.