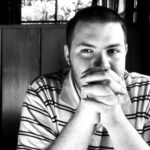 Today’s guest blogger is Chris Sherwood. He came to Spokane Civic Theatre for our run of Legally Blonde, The Musical as the Assistant Music Director.

Chris is an award-winning composer with credits in film and video games, but his true love is musical theatre. Chris has both played keys and music directed shows across the nation, from New York to Washington, but is truly excited to have been part of his first production here at Civic.

The Joys of Working with the Cast of Legally Blonde, The Musical

If you’ve been anywhere near Spokane Civic Theatre during the past four weeks, then you know the theater has been completely taken over by bubbly, energetic and talented teenagers of all ages and backgrounds.

If you don’t know what I’m talking about, let me introduce you to a side of Civic you may not know much about, our incredible Academy program. 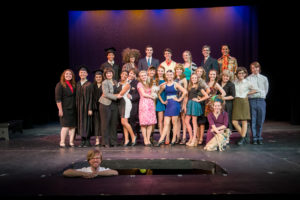 To some, the prospect of spending eight or more hours a day with these young adults would seem crazy, and there are times throughout the process where I’m sure many of us would agree with you. However, I can honestly say that getting to work with these young actors has been one of the most rewarding aspects of my career in music theater.

As Assistant Music Director, I get the unique opportunity to not only work with the actors, but also to watch as they interact with the creative team behind this year’s academy production of Legally Blonde, The Musical. Even before the official first rehearsal, several of the leads from the show gave up their weekend to come in and work with our wonderfully talented Music Director Benjamin Bentler.

Ben came over from Seattle specifically for Legally Blonde, with past music credits at the award-winning Fifth Avenue Theatre in Seattle and the Marriott Theatre in Chicago. This gives you an idea of the level of quality Spokane Civic Theatre provides students while they take part in the high school Academy program. 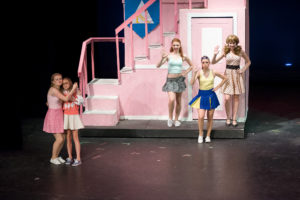 Elle makes her decision to go to Harvard. Her Trio counts out the steps: 1, 2, 3! Photo credit: Heads & Tails Photo

As part of an Academy cast, a lot is expected, especially in a show as huge and difficult as LegallyBlonde, The Musical. I can’t put into words the commitment I’ve seen from these kids, whether it’s hearing James Hogstad tirelessly belt out his part from down the hallway, or watching the Delta Nu Trio (Autumn Plucker, Madeleine Rush, Sarah Wier) come rushing full speed out of the theater to excitedly show me how they finally aced their harmonies.

I would be remiss to not also mention the growth of Sierra Perrins (Elle Woods) and Dominick Betts (Emmette Forrest) from two timid individuals in rehearsals to the confident rock stars you now see on the stage. I could write pages about every cast member in this show, and I apologize for not publicly acknowledging each person’s accomplishments, since they all truly deserve it.

As we move into this last weekend of the show I can honestly say that every member of our creative team, from Delvone Bullis (Director) to Hannah Farley (Choreographer), has sore face muscles from smiling so much. We love watching this cast not only connect with the show, but also grow exponentially as performers. 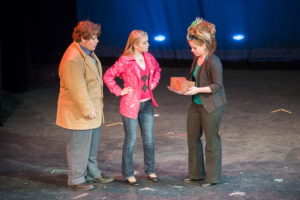 I would also like to take this opportunity to thank those individuals and organizations that have given to our scholarship fund. Many of our cast members would not have been able to be part of this production without your support. If you’d like to be a part of helping a talented young person attend future academy programs here at Civic, download a donation form here.