A penny for your fart. Escanaba in Love.

Yes, we just said that. 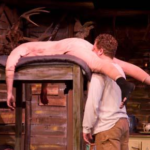 centers on young Albert Soady Jr (who is the eldest character in “Moonlight”) about to go off to war when he meets and falls head-over-heels with Big Betty Balou (the woman who is Reuben and Remnar’s mother in “Moonlight”). We also meet Salty Jim (who is the father of Jimmer from “Moonlight”). So to those familiar with “Moonlight”, it’s an intriguing look into the inception of those beloved characters. But to those who have never seen “Moonlight”, you don’t have to worry: the story is still very easy to follow.

This IS a guy play, but don’t let that sway you

When it comes to Jeff Daniels’ plays, you gotta wonder who his audience is. In this case, Taylor says the play definitely has guy moments and “there are fart jokes and lots of talk about hunting and fishing and drinking. But there are also some tender, honest moments…” Escanaba in Love, directed by Scott Doughty (think Best Little Whorehouse in Texas and BINGO), is really a peek in to a boys night out and Chris Taylor thinks that is exactly why women will find it so appealing. There’s something so forbidden there.  And he suggests that you not totally “check your brains at the door but you shouldn’t take it that seriously either”.

And back to the fart

You know we couldn’t stray far from it, right? When we asked Chris to share some of his favorite lines so we could tempt Spokane Civic Theatre patrons, he wasn’t willing to part with much. But he tells us “a guaranteed laugh is when Big Betty enters camp for the second time, having recently returned from the outhouse to do her business, when she says ‘that just might have been the finest two-holer I ever had the pleasure of droppin’ a duker in.” Yea, we just said duker. This is just plain silliness. But it gets even sillier. Apparently, the play makes us of a gas dollar jar that collects pennies for every fart. We’re thinking that when you attend this play it would be best enjoyed if you would channel your inner adolescent boy as you enter Civic’s lobby.

So there it is, at its most basic