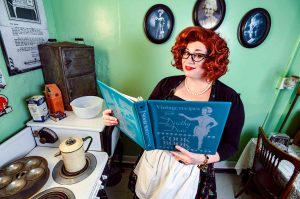 To celebrate 135 years in the community, the Spokesman-Review is bringing one of its most beloved features, Dorothy Dean, to the stage at the Dorothy Dean Home Cooking Show, Saturday at the Spokane Convention Center.

And while Dorothy Dean was the pseudonym for the newspaper’s food editors for nearly five decades, Saturday’s cooking show will feature Dorothy in the flesh. Sort of.

Spokane actress and singer Abbey Crawford will tie on Dorothy’s apron to bring a 1950s version of the cooking maven to life.

In so many ways, Crawford, who came to the role through Spokane Civic Theatre, is a perfect fit to play Dorothy. As a professional hairstylist, she’s done vintage hair and makeup for herself and clients for a decade. As an actress, she’s been memorable in shows from “Sweeney Todd” to “The Wild Party.” And as a cabaret singer and vocalist with the Hot Club of Spokane, she’s right at home with a jazzy, 1950s vibe.

And a jazzy, 1950s vibe is what she’s going for in her Dorothy, drawing inspiration from some of the women in her own family.

“She’s more of a broad,” Crawford said. “I was raised by a bunch of broads. Very, very strong women. I think she is very definitely a broad.”

It will take about an hour for Crawford to become Dorothy, pulling clothing and accessories from her own closet to do it.

And once she “puts her on,” and heads to the convention center on Saturday to pose for photos and mingle with cooking show attendees, she’s looking forward to meeting Dorothy’s fans.

“I’m most looking forward to meeting people who actually have a history with Dorothy Dean. I know a number of people who have kept the cookbooks over the years,” Crawford said. “It would be really fascinating to me to meet somebody who has one from maybe their grandmother or their great grandmother.

Article by Carolyn Lamberson and Azaria Podplesky of The Spokesman Review