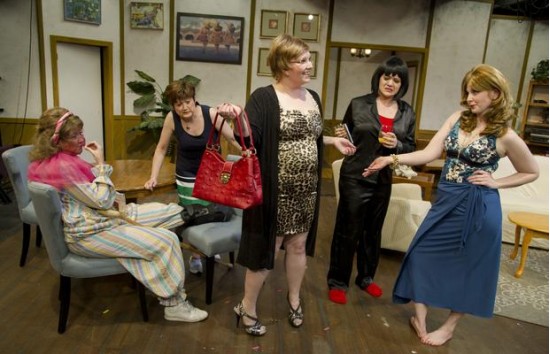 Since they were in college together, the self-appointed members of the Dixie Swim Club have been inseparable. They’re five headstrong Southern women, all grappling with middle age in their own way, and for one weekend every August, they bond over gossip and cocktails in a beachfront cottage in North Carolina.

“The Dixie Swim Club,” directed by Tia Wooley and currently running at the Civic Theater, drops in on four of those weekends over the course of three decades, catching up on each of the characters’ lives as they veer off into unexpected directions. There’s talk about love, marriage, children, divorce, sex, disease and death, and as the women get older and wiser, cottage getaways remain the constant in each of their lives.

If the group has a matriarch, it’s Sheree (Tami Rotchford), who reserves the house every year, keeps everyone in line and forces her New Age health food appetizers on everyone. Also present is Dinah (Heidi Farr), a no-nonsense lawyer who always has a flask attached to her lips; Lexie (Julie Watts), who is still holding on to youth with cosmetic surgery and a revolving door of husbands; and Vernadette (Sara Nicholls), whose children are in a perpetual state of incarceration. And then there’s the flighty Jeri Neal (Cassie Coleman-Heppler), who, as the play begins, has fled from a convent and is eight months pregnant.

“The Dixie Swim Club,” as written by Jessie Jones, Nicholas Hope and Jamie Wooten, is a little arch in its portrayals, taking the Southern-fried clichés, light comedy and occasional melodrama of “Steel Magnolias” and confining it to a cabin instead of a hair salon. These characters are, more or less, types: the worrisome mother figure, the buxom belle, the steadfast attorney prone to grand pronouncements, and so on.

But Wooley’s cast does wonders with the material, and they sidestep stereotype by creating real characters and not succumbing to the obvious tics we’ve seen so many times before. We scoff at the very theatricality of these women, who seem to be going through life as if they’re always in character, until we realize that this is simply who they are; their quirks are, if nothing else, defense mechanisms to soften the harsher aspects of aging and growing apart.

The play doesn’t just wallow in Movie of the Week territory, though – there’s quite a bit of comedy here. “The Dixie Swim Club” is, surprisingly, at its best and most entertaining when it indulges in its sillier sensibilities and goes for broad, goofy physical humor. There’s a solid gag involving Jeri Neal’s questionable wardrobe choices for an upcoming job interview, and a good running joke that keeps poor Vernadette in various states of injury. The dialogue, too, is particularly sharp, with an arsenal of one-liners, catty asides and rat-a-tat back-and-forth that the cast aces.

By the time “The Dixie Swim Club” reaches its final act, the characters are in their late 70s, and we’ve seen 33 years unfold inside the small North Carolina cottage. Children have become parents, and parents have become grandparents; new relationships form and old ones fade, as with the death of one of the members of the club.

But despite everything that occurs, nothing really changes – the characters might grow older and further apart, but their essences remain the same. It seems that all of the major developments of our lives occur in between the most meaningful ones, and those meaningful moments are often the most simple. In the case of the Dixie Swim Club, their worlds revolve around those weekends at their cottage, and they’re at their happiest when they’re with one another, a screwdriver in one hand and a biscuit in the other.