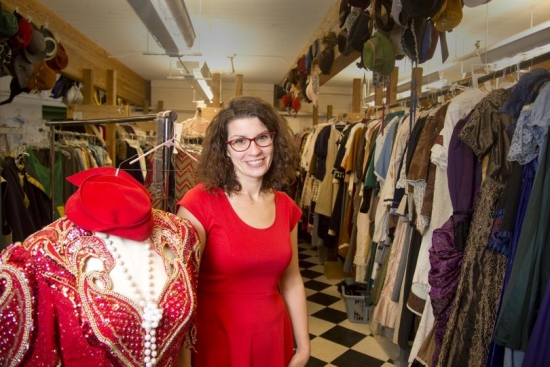 Kearney Jordan keeps up a running description of costumes as she glides through aisles packed with fashions from the 1500s through the present.

“This is the Victorian section,” Jordan says, pulling out a long, purple, velvet gown reminiscent of the clothing in “Downton Abbey.”

“Then we have colonial, medieval, and renaissance dresses,” she says, stopping to separate the costumes by the eras.

Jordan, manager of The Little Shop of Rentals at the Spokane Civic Theatre, is one of Spokane’s unsung heroes – in the background, quietly making a lot happen, said Ellen Picken, Spokane Arts’ interim executive director.

“Jordan’s efforts to cultivate and establish relationships with various arts organizations and other community programs reflects her belief in that sense of community,” Picken said.

Jordan is one of the nearly 25 nominees for the 2016 Arts Heroes awards, honoring people who promote and support the arts in Spokane.

The four categories of awards include collaboration, imagination, inclusion, and leadership, and winners will be announced on Nov. 5 at the third-annual fundraiser and costume ball in downtown Spokane. A separate award will be given in honor of lifetime achievement called the “Karen Mobley Impact Award,” named after the Spokane artist, writer and former director of Spokane Arts.

Jordan, who was nominated in the collaboration category, is known for describing Spokane’s Civic Theatre as of the people and for the people of Spokane, Picken said.

“The Civic is my home, literally and figuratively,” Jordan said with a laugh last week while leading a tour of the theater. “And I do love what I do.”

Article by Judith Spitzer of the Spokesman Review

Photo by Jesse Tinsle   of the Spokesman Review