Civic's The Producers gets a little press action 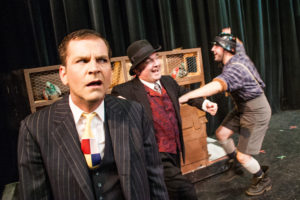 Civic’s production of The Producers is getting it’s fair share of press action. It’s always a bit of a gamble to open a season with a show that pokes fun at well, exactly what we do. And to take on something as taboo as Hitler, well, you see where that might be an issue. And of course, Mel Brooks is Mel Brooks. But it looks like Spokane is enjoying Spokane Civic Theatre’s production of The Producers and we thank our community for embracing this cast and crew with open arms.

So take a look at what the Spokesman Review says about The Producers:

Leave it to comedy legend Mel Brooks to conceive a musical with material so offensive it becomes downright hysterical…Sciarrio and Pleasant manage their roles well and make an amusing duo; their performances are similar to Nathan Lane’s and Matthew Broderick’s sardonic portrayals on Broadway…An ensemble of elderly ladies dancing with walkers and side-splitting cameo appearances by character actress Kathie Doyle-Lipe served as other highlights of the show, as well as Jan Wanless’ costumes and David Baker’s set design in Act Two.

And The Inlander chimes in with their opinion of Civic’s staging of the producers:

It’s not easy to turn bad taste into good humor, but the Civic pulls it off… Under the direction of Marianne McLaughlin, the Civic pulled off a great show… the excellent supporting cast (Babbit, McKeever, Pierson) enhanced the clear talent and suitability of the leads (Sciarrio, Pleasant)… It’s the spirit of gleeful irreverence that makes The Producers such fun, and this production channels that blithe spirit brilliantly.

Wow, again, just wow. Thank you Spokane for enjoying The Producers as much as we have enjoyed putting on the show. Here’s to a great run and we hope to see you here laughing, chuckling and smiling.

To find out more about Spokane Civic Theatre, check out Civic News, stay up to date with cast and crew on our Facebook Page and keep an eye on Pinterest for some pinnable images of all things theatre! Upcoming productions for the Season to Inspire include A Closer Walk With Patsy Cline, White Christmas, Escanaba in Love, Next to Normal, On Golden Pond, Treasure Island, Grease and more.