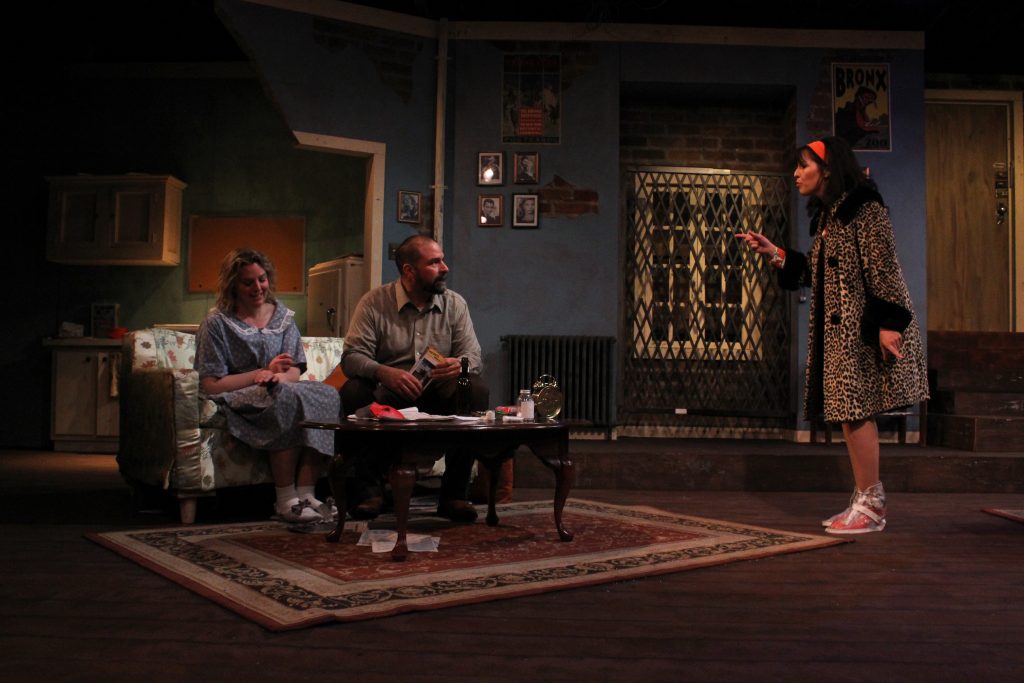 It’s an interesting experience to, while watching a play, enjoy the actors but dislike the characters they play.

While watching Spokane Civic Theatre’s production of John Guare’s “The House of Blue Leaves,” directed by Heather McHenry-Kroetch, I had one of of those experiences.

“The House of Blue Leaves” takes place over the course of a single day in New York.

As the Pope arrives, so, too, does Artie’s friend, Hollywood producer Billy Einhorn (Patrick McHenry-Kroetch), and his starlet girlfriend Corrinna Stroller (Dana Sammond).

Three nuns (Marty Kittelson, Sophia Mosbrucker and Erin Jellison) also get caught up in the chaos.

There was hardly a scene during which Rivera was not on stage, and he handled such a large role with ease.

Altevers, who also spent a significant amount of time on stage, brought a lot of energy to the show as the off-the-wall Bunny, Rivera’s biggest supporter.

Rivera and Altevers had fun chemistry together, especially when singing and dancing to one of Artie’s songs, “Where’s the Devil in Evelyn?,” in the second act, even if they were often cruel to Edwards, as Artie’s wife Bananas.

Some of their dialogue felt really harsh – Artie gleefully shared a dream he had in which both the Pope and their son ignored Bananas and later tells another character Bananas is dead to him, and Bunny says Bananas gives off poisonous fumes – hence the apathy about their storylines, but that just goes to show how effectively both actors delivered their lines.

Edwards really committed to showing off both ends of Bananas’ spectrum, the times when she wanted to eat her food like an animal and when she spoke with Einhorn in the second act: “I don’t mind feeling so long as I can be in a place where I remember feeling.”

In his big scene, Peters really made the audience feel the embarrassment Ronnie felt when, as a child, he put on a spur-of-the-moment audition for Einhorn, who was looking to fill the role of Huckleberry Finn in a movie.

McHenry-Kroetch took Einhorn through a range of emotions. The audience first meets him when he’s grieving, but before long, he’s lovestruck and looking forward to new plans.

Jellison, Kittelson and Mosbrucker added a lot of humor to the show, and I found myself rooting most for Sammond’s Corrinna as she hilariously tried to hide a medical condition from the others.

“The House of Blue Leaves” is the definition of a dark comedy, though one element doesn’t overshadow the other. There are dark moments, yes, and there are lots of laugh-out-loud moments, too. Both help bring audience members even further into the world of Artie, his family and the company he keeps.

A note: Arrive a few minutes early to see a pre-show performance from Artie.