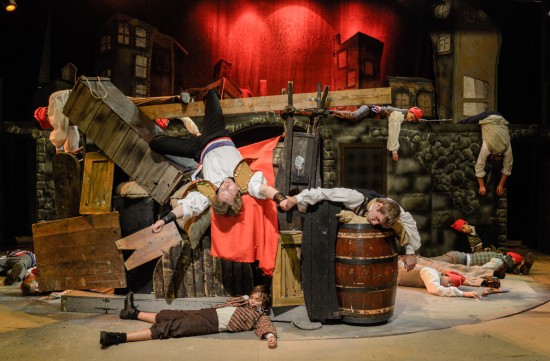 When Spokane Civic Theatre announced they’d be kicking off their newest season with a production of the epic musical “Les Misérables,” it was hard not to be a little, well, incredulous.
That’s not to speak poorly of the abilities of the Civic’s outstanding cast and crew, but rather to the sheer scope of the show itself, which is so enormous that I couldn’t imagine it being properly executed without a Broadway-size stage and a million-dollar budget.
Apart from the difficulty level of the show, there was a further roadblock: Director Douglas Webster, who has performed in “Les Miz” on Broadway, was brought in only a couple of months ago to replace Yvonne A.K. Johnson, the Civic’s former artistic director, after the show had already been cast and production was underway.
But despite the behind-the-scenes commotion, my apprehension was for naught: Webster and his remarkably talented cast have put together an excellent show, and their lively, stirring interpretation of “Les Misérables” is of a quality that all community theater should strive for.
“Les Miz,” based on the 1862 novel by Victor Hugo, is one of the most recognized and renowned musicals of the last several decades: It’s one of the longest-running shows in Broadway history, it won eight Tony Awards in its original run, and it was adapted into an Oscar-winning Hollywood film last year.
The show portrays the turmoil of 19th century France, from the wretched existence of the peasants and ex-cons to the social upheaval that led to the Paris Uprising of 1832, which serves as the musical’s dramatic climax. It’s also the story of Jean Valjean, who attempts to redeem himself, both morally and spiritually, after a lengthy prison sentence he received for a petty theft.
But “Les Misérables” is truly a performer’s show, and I can’t stress enough the excellence of the entire ensemble that the Civic has assembled here. The score, written by Alain Boublil and Claude Michel Schonberg and translated into English by Herbert Kretzmer, features individual musical numbers that really allow the actors to show off their pipes.
Jim Swoboda is remarkable as Jean Valjean, one of the most coveted (and trickiest) roles in any musical. He’s never better than in Valjean’s second act solo “Bring Him Home,” a moving ballad that requires a remarkable vocal range and Swoboda nails every note. Also impressive is Darryl Gurecky as Javert, the police officer who aims to put Valjean back in prison, especially during “Stars,” which reveals the complex ideology behind Javert’s dogged pursuit.
At the opposite end of the spectrum is “Master of the House,” the hilarious show-stopper performed by drunken barkeep Thénardier and his wife, played with terrific comic dexterity by Doug Dawson and Darnelle Preston. And, of course, there’s “I Dreamed a Dream,” arguably the show’s most famous tune, gorgeously sung by Andrea Dawson Olsen as tragic waif Fantine.
One of the great pleasures of “Les Miz” is the supporting cast that fills out as the show progresses, and they’re brought to life here by Civic’s stable of first rate actors: Natalya Ferch as Fantine’s daughter Cosette, Cody Bray as Cosette’s admirer Marius, Miranda Anderson as the beautiful street dweller Éponine, and Robby French as revolutionary leader Enjolras.
Apart from the actors, the staging here is particularly impressive. The production crew has recreated the rotating platform utilized in previous productions of “Les Miz,” and it’s easily transformed into the barricades during the climactic rebellion and the bridge overlooking the River Seine. It’s a little creaky, but no matter: It’s exciting to watch the Café Musain become the Rue Plumet with a mere rotation of the stage.
I think the reason “Les Misérables” works so well and connects with us emotionally is that it begins on an intimate, personal scale before unfolding into a vast historical epic. The individual plights of Jean Valjean and Cosette bring humanity to the social and political issues at large, and Webster and company seem to understand that.
It’s impressive enough that they had the nerve to attempt “Les Misérables” in the first place, but it’s even more impressive that they’ve pulled it off so grandly.