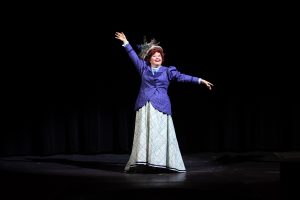 Had it not been for a chance encounter in a fabric store, Spokane Civic Theatre’s production of “Hello, Dolly!” would have looked a lot different. Robbi Starnegg, who stars as Mrs. Dolly Gallagher Levi, was cutting fabric for Civic costume designer Jan Wanless when the conversation turned to “Hello, Dolly!” auditions. Starnegg, who moved to Spokane a little more than a year ago, decided to audition. According to director Troy Nickerson, Starnegg had worked professionally for years and had always wanted to play Dolly.

During her audition, it quickly became apparent that Starnegg was just right for the role of the widowed matchmaker. “She had a spark that I loved,” Nickerson said. “She moves well, she has a charm and a warmth to her that I really like. She’s a big voice and a great actress. What else do you need?” Before joining Civic’s production, which opens Friday and runs through June 10, Nickerson’s only experience with the musical was as one of three choreographers on a production of “Hello, Dolly!” nearly a decade ago. He wasn’t too familiar with the show otherwise but has since enjoyed getting to experience it in a new way and find new elements, mainly the story itself, to love.

“Hello, Dolly!” follows Levi, a sought-after matchmaker tasked with finding a wife for “half-a-millionaire” widow Horace Vandergelder (Thomas Heppler), who Levi herself is pining for, and Ambrose Kemper (Preston Loomer), who has his sights set on Vandergelder’s niece Ermengarde (Marlee Andrews).

“It’s interesting that the three characters are all suffering loss,” Nickerson said, referring to Levi, Vandergelder and the widowed Mrs. Irene Molloy (Heidi Santiago), a milliner who Levi introduces to Vandergelder. “It’s about them joining the human race again and recovering and coming back to life. To still find something in the show like this that has something to say in between all of the incredible production numbers, that’s been fun.”