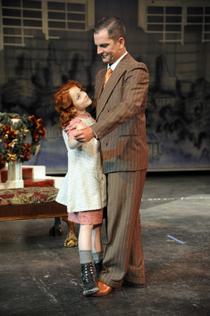 Directed by Yvonne A.K. Johnson, the show exudes the uplifting and heartfelt spirit of Charles Strouse, Martin Charnin and Thomas Meehan’s 1977 Broadway hit – a quintessential rags-to-riches story based on Harold Gray’s “Little Orphan Annie” comic strip about the adventures of a redheaded orphan girl and her dog, Sandy, set during the Great Depression.

Starring in a young actress’ dream role, Sophia Caruso is clearly – in showbiz terms – a triple threat. Though 10-year-old Caruso’s approach to the role is vulnerable, soft-spoken and a lot less rough-and-tumble than some of her Annie predecessors – e.g., Aileen Quinn’s portrayal in the 1982 film version – she is just as effective. Her belting of the show’s signature ballad, “Tomorrow,” seems second nature. One simply cannot resist her charm as she warms the heart of detached billionaire Oliver “Daddy” Warbucks (Mark Pleasant). She also relates well with frisky sidekick and SpokAnimal rescue dog Sandy, even when he seems to care less about the audience and more about the treats in her pocket.

Pleasant is convincing as the successful yet lonely Warbucks, even though he doesn’t display the character’s traditional amount of gruffness nor bald cap and white dinner jacket. Vocally, he delivers a smooth and moving rendition of “Something Was Missing.” Pleasant and Caruso’s interactions are sincere, and they make a fine tap-dancing duo in “I Don’t Need Anything But You.”

In a role made famous by such greats as Carol Burnett, Kathy Bates, Sally Struthers and Nell Carter, Phedre Burney-Quimby gives a less abrasive yet fitting portrayal of the cruel orphanage supervisor, Miss Hannigan. Burney-Quimby who played the role of Annie in the Civic’s last production 28 years ago, is complemented by Muzatko, who also plays the role of Miss Hannigan’s con-man brother, Rooster, and his attractive dame, Lily (Angela Pierson).

The 10 orphans deliver much of the show’s playfulness. Among them are spunky Molly (Marlena Mizzoni); worrisome Duffy (Autumn Plucker); and bully Pepper (Kiersten Gasper).

Closing the theater’s impressive 65th anniversary season on a particularly high note, this first-rate Civic production is one you will not want to miss.