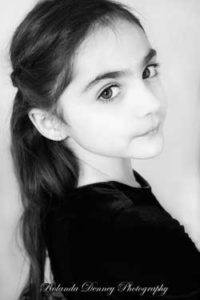 Well, on stage in White Christmas she’s Susan Waverly….in life, she’s Marlena Mizzoni. Susan Waverly, the grand-daughter of General Waverly (to find out who he is, you need to see the show…opening this Friday on Spokane Civic Theatre’s Main Stage), is supposed to be visiting her grand pappy over the holiday season. She’s supposed to be witty, wise beyond her years, and totally into showbiz.

Marlena who had never had a singing lesson or an acting lesson before performing in Annie at Spokane Civic Theatre last Spring.  Annie was life changing for little Marlena and by definition, her mother, Joy Mizzoni. According to her mom: and she digs showbiz.

All I know, is that, given the opportunity to discover both her singing and acting talent…she exploded! She had to get up every morning early for school with rehearsals 5 days a week, and perform in 20 something shows at Spokane Civic Theatre. It was hard for her. She was tired and the youngest on set. It was a blessing for Marlena . These Annie girls and women were just everything I could ask for female influencers on my daughter. Honestly, Marlena’s participation in Annie was life changing for me and both my daughters also.

And then the call from Yvonne AK Johnson came:

I was ecstatic when I received a voice mail from Yvonne AK Johnson, the executive artistic director of Civic, personally requesting Marlena playSusan Waverly. (! I am still so excited! She stepped into the role like it was her 10th play…not her second, and definitely not her first major role.

And it looks like Marlena and her time at Spokane Civic Theatre are changing more lives than one.

As a mother, I want nothing more than for both my girls to live their passions fearlessly. Marlena is setting that example for not only her younger sister….but for other little girls with big dreams and big hopes. Marlena has demonstrated the amazing things you can accomplish if you set fear aside and follow your heart.

To find out more about Spokane Civic Theatre, check out Civic News, stay up to date with cast and crew on our Facebook Page and keep an eye on Pinterest for some pinnable images of all things theatre! Don’t forget, we’re active on Twitter as well: SpoCivicTheatre. Upcoming productions for the Season to Inspire include White Christmas, Escanaba in Love, Next to Normal, On Golden Pond, Treasure Island, Grease and more.