Then and Now: Riverside Theater 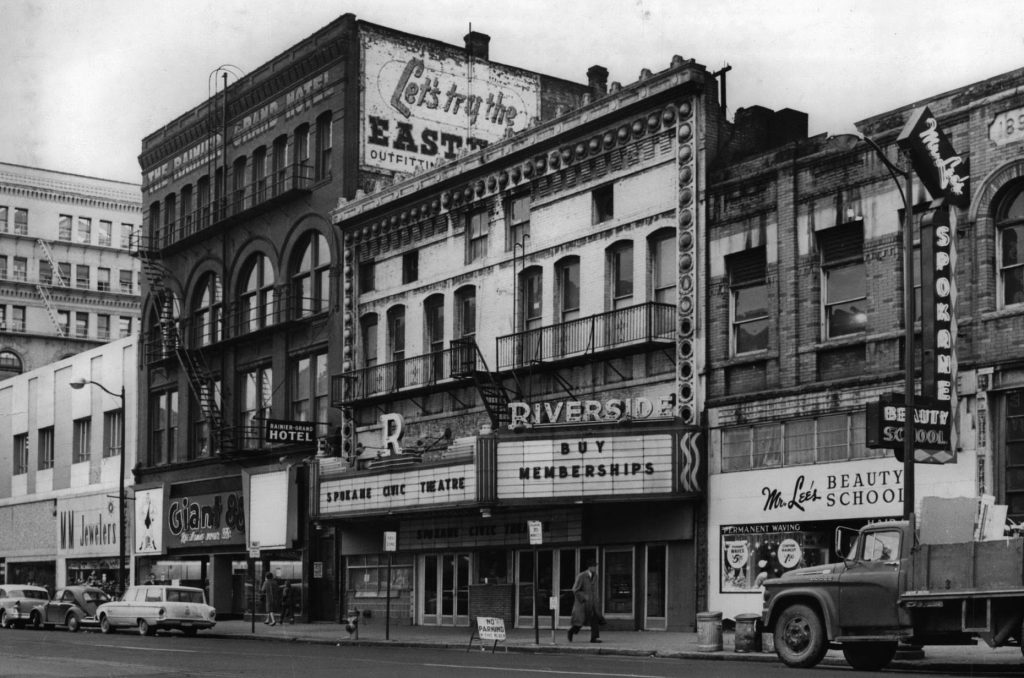 The early Spokane Civic Theater formed in 1946 after Spokane’s theater scene went dormant during World War II. But the group always struggled to find a permanent home. In the late 1940s, the group used a small building at 652 S. Denver, but neighbors didn’t like the theater’s traffic. Gonzaga University let them use the old Canteen building, but it burned down in 1954. The resolute theater company announced a capital fundraising effort to build its own theater in 1955. Fundraising was slow and in 1957, the Civic Theater, later spelled “theatre,” signed a lease to make the Riverside Theater its home.

The Casino Theater, on the 800 block of Riverside Avenue, opened in 1909, built by contractor John H. Clemmer, who also built the Clem and Empress Theaters and other buildings. Although cinema was still in its infancy, the Casino was a well-lit, welcoming place.

John Clemmer died in 1911 and his son, Howard Clemmer, a dentist, dropped his practice to manage theaters. In 1915, mining millionaire August Paulsen built an upscale theater at Lincoln Street and Sprague Avenue, and let Dr. Clemmer manage it as the Clemmer Theater. It’s now the Bing Crosby Theater but has been operated as the Audian, the State, and the Met.

The Casino was purchased in 1927 and renamed the Granada, adding a Spanish theme to the decor. It was sold again in 1955 and renamed the Riverside Theater. The new owners, facing intense competition, leased it to the Civic and dismantled the projection equipment.

The Civic performed in the old theater for several years until a bank bought the building in the early 1960s and set a deadline for the troupe to move out. The Civic paid $35,000 to the city for land across Howard Street from the old Coliseum and architect Moritz Kundig designed a modern theater building. The group’s new theater opened in 1966 and is still in service.

The old Riverside Theater and the two buildings to the east were torn down in 1966. The new Pacific National Bank opened there in 1968. It is now the Spokane Regional Business Center, with multiple tenants, including Greater Spokane Incorporated, the region’s business development organization.

Article by Jesse Tinsley of The Spokesman Review