What the Heck is Second Samuel?

There is nothing like a little southern comfort and that is just what Second Samuel offers. Second Samuel is a moving play written by Pamela Parker which delves into small town southern living. We see the story play out from the point of view of B Flat who is a little slow and absolutely endearing. This is a time when the men hung out together at the bar, the women at a salon and times were slow and easy. But not that easy. When one of their own, the town’s most beloved piano teacher, dies, the small town folks are in for the surprise of their lives as deep and dark secrets come out. Trust us, this IS a comedy full of southern life complete with cantankerous characters, gossip and teaches us all a beautiful lesson of tolerance and love. Pay special attention to B Flat as he narrates the story and feel your heart melt, just a little bit.

Bring Us Some Boiled Peanuts

We sat down with direction Jhon Goodwin who you may remember as Vince Fontaine in last season’s Grease and who directed A Closer Walk with Patsy Cline as well. We had a few questions for him as everyone is curious to what life is like in Second Samuel land. Here’s what he had to say:

Civic: What made you want to direct it?
Goodwin: The story! From the first read I knew I had to do this one!! It is a wonderful look into a small southern town in the late 40’s and how they, and ultimately we, see and understand one another.

Civic: Since you are the director, how much input do you get in how the set and the costumes will look?
Goodwin:  In that area I am one lucky guy! I’ve had the distinct privilege of working with Matt Egan for the second time on my set (He was the brilliance behind the set of My production of “A Closer Walk with Patsy Cline” last year). Matt is absolutely open to input and is able to put my thoughts out exactly as I saw them in my head… Usually better! As for costumes, I have Ms Jen Birkey helping me out with those. From what I’ve seen so far, she has a keen eye for the time and place and is absolutely open to my input. I’m quite excited about the look of this one. 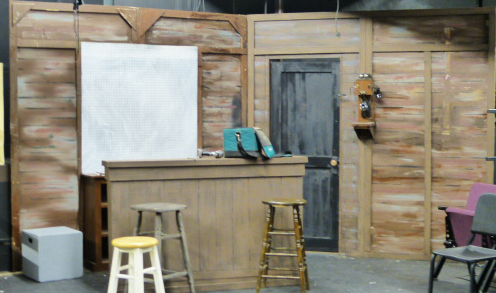 The set of Second Samuel still in progress

Civic: What are your favorite moments of the play?
Goodwin: It is an Ensemble piece and as cheesy as it sounds there are more great little moments than I can name here. This cast is finding new and amazing stuff constantly!

Civic:  Why should we come and see this play?
Goodwin: The CAST! The story! I truly believe this one is going to impress. From some of the most experienced actors in the area to some brand new faces to the Civic stage, I am wildly lucky to have folks who are creative, have truly impressive instincts, and are willing to take chances with their characters. Truly brave actors.

Civic:  Which character is your favorite?
Goodwin: Yeah, wouldn’t that start a fight… Ha! My answer is actually Ms. Gertrude. She is the catalyst for all the other character’s discoveries.

Civic: What’s it like to direct a play set in the 40s, in the deep south? I mean, you live in Spokane, man. It’s not like folks up here know what a boiled peanut is, let alone tastes like. How do you coax southern out of your cast?
Goodwin: That is the trick, isn’t it? At least some of the play deals with southern understanding from that time and its’ treatment of those different from us. At least some of the cast have experienced the deep south. My Dad is actually from Water Valley, Mississippi which is about as deep south as it gets. Having been to a couple family reunions/Chitlin’ Feeds, I have at least a tentative understanding. We work hard at feeling the slowness and ease of the rural south.

Goodwin: And Thanks for the idea!! I gotta find where I can find some boiled peanuts for them!

Southern Comfort Come on Down

So, there you have it. Just a bunch of plain ol’ normal folks, doing what they do, living life and learning to make all the right choices. And just to tempt you…a little bit:

There was a time not  so very long ago when folks was different than they are nowadays….Everybody said yes ma’am and yes sire and they meant it!….Wadn’t long after the big one, W.W. II! The men come back home from whuppin’ ol’ Adolf Hitler, the women quit their jobs in the factories and the children finally got to meet this man called “daddy” they’d only heard about up until now! Oh, it was an excitin’ time!